Hammering may seem like a harmless chore, but it can do considerable damage to the user’s body in long run, especially if the person lives by the hammer or whatever striking tools. The shocks and vibrations with each strike are also signs that the forces applied are not being put to good use as they should. Those are two areas which FISKARS’ new line of 15 IsoCore Striking Tools, including hammers, sledge hammers, mauls and picks, aimed to resolve. Slated for launch in 2016, these tools feature FISKARS’ patented IsoCore shock control system that will absorb strike shock and vibration, thereby alleviating their impact on the user. 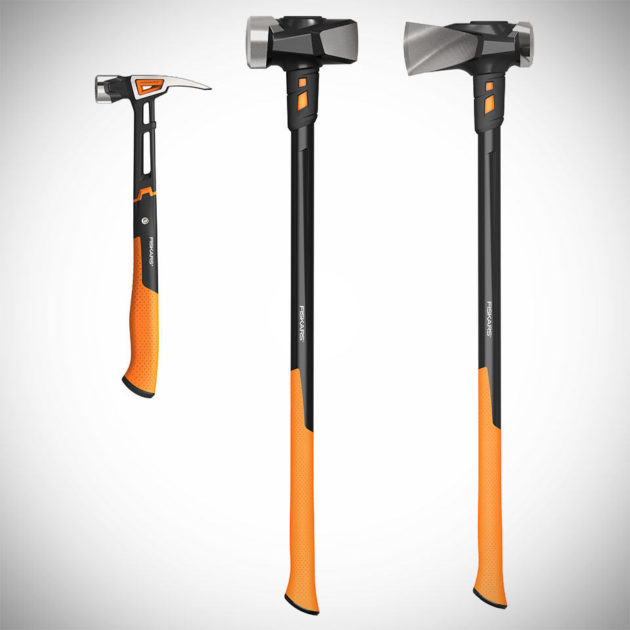 This innovative technology was jointly developed by FISKARS Americas and FISKARS EMEA engineering teams and the tools with IsoCore technology have been tested by industry experts such as Sims Vibration Laboratories. The tests proved that IsoCore hammers are capable of producing three times less shock, while the sledge hammers deliver five times more demolition force over its competitions. Of course, casual users of such tools probably won’t maul over the effect and impact of striking tools, or even be bothered by the efficiency of the tools, but it is nice to know there are companies innovating on areas that are largely being ignored.

This is what we call progress. Striking tools have come a long way, from ancient sharpen rock tied to a stick to the form we are accustom to. However, they generally hasn’t changed since. Perhaps, FISKARS IsoCore Striking Tools would be an important change we have seen in the longest time. Anyways, details are sparse, if any, but as recognition of FISKARS’ innovative edge, FISKARS IsoCore Striking Tools received the Bronze Most Innovative New Product Launch Award by the National Hardware Show (NHS) in Las Vegas last week. FISKARS IsoCore Striking Tools were picked up by a panel of 13 distribution and retail vendors from among 54 entries which were judged based on product differentiation, uniqueness, filling a consumer need, overall value, aesthetics, packing and merchandising support.