When it comes to biomimicry, EPFL, or Swiss Federal Institute of Technology, is no stranger, but the Zebrafish robot you see here took the institute’s biomimicry technology to a new level of small because, Zebrafish. Granted, at 7 centimeters (2.75 inches) long, this bares-it-all tiny robotic fish is a tad larger than an actual aquatic creature of this species and obviously, look vastly different with its transparent enclosure that pretty much show off its electronics, it managed to assimilate into the school. The researchers not only wanted to develop a robot that will eventually influence the behavior of the organic counterparts, but also capable of adapting its own behavior by picking up communication skills (yes, really) and mimics the real fishes’ movements.

In other words, the researchers over at EPFL’s Robotic Systems Laboratory (LSRO) has effectively created a spy among the fishes, well, at least it is among the Zebrafish. However, a robot that swims in a tiny package like such is not possible given today’s technology, so the little guy has to rely on a tiny engine under the aquarium for movements, conveyed via magnets. Though so, it appears that the school are nonchalant about its existence and it also does not let them down and reciprocate by behaving like them, roaming the bottom of the aquatic tank quickly and switching directions just as swiftly. However, I am obliged to think that it hasn’t fully assimilated into the community because it can’t dart up and down through the water like the real Zebrafish do due to the engine’s limitations. Right now, its movement is more like those magnetic tank cleaners. 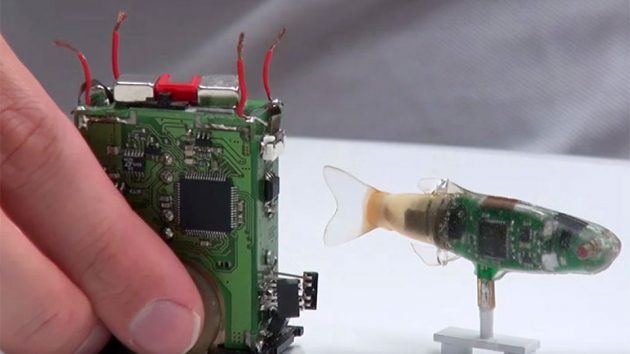 So, what will this research yield? Well, there are two aspects to this program: first, it tackles the biology aspect, allowing researchers to study the social interactions between the individual fish with targeted stimuli to test the fish’s response (don’t ask). But it is the development work of the robotic technology that make this possible that’s what the group is really interested in. The electronic variant of the Zebrafish has been in the water for while now and up to now, the original swimming mechanism has showed improvement which means, it is indeed learning and asides from the look, the school appears to have accept it (but we still standby our reservation as expressed above).

Though no one ever understand how fishes communicate cos’ no man speaks fishes and therefore, we will never know if it is being ostracized for its unusual look. However, the researchers have noted that the robot managed to mimic the organic counterpart’s behavior and in the process, appears to be influencing them. Who knows, its unusual look may have scored himself the alpha Zebrafish title, hence the result observed? Catch the entire video after the break.