You have seen ruggedized power bank and ruggedized smartphone case, now meet one that is both and with solar charger to boot. RokPak Pioneer Series, as it is called, is not quite a smartphone case, though. It is a drybox that packs features that your small gadgets will need to survive out in the wild which includes extreme protection, backup battery and near-endless supply battery. The box itself is designed to float on water, along with a construction that meets IP67-rating and MIL-STD-810G for protection against dust and water, as well as shock from drops. 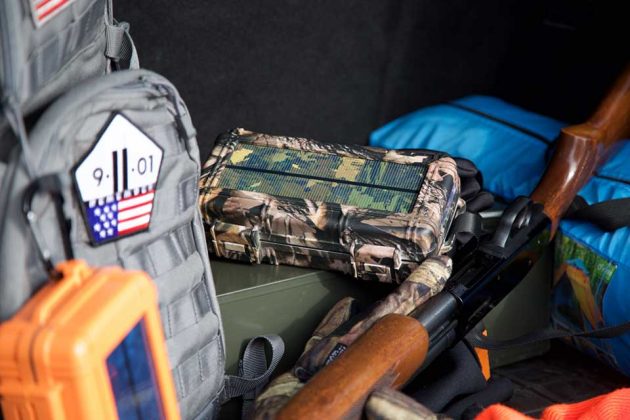 It’s onboard battery, a 12,000 mAh li-ion pack, is capable of charging two devices simultaneously through two 2.4A ports. A myriad of circuitry system comes as standard to ensure the gadget does not harm itself and the gadgets it is charging. When in extreme condition or on-the-move, your smartphone has the luxury of cocooning cozily inside the super tough case as it draws charges from the battery. A four-function LEDs on the outside serves as a flashlight and as a water-activated LED SOS beacon. The LEDs, which is surrounded by an electroplated reflector, also provide visual cue if your device rings when charging inside the box and you can even ignore the call by hitting the press light button, eliminating the need to open the box.

There’s a built-in solar panel too, to enable charging of the onboard battery whenever there’s sunlight, so theoretically, you can just go on and on without worry of the power bank will conks out. Though, it is not known what’s the efficiency of the Monocrystalline solar panel (it appears to be 500 mA). As far as robustness is concerned, this nifty gadget ‘handbag’ is designed for extreme adventure, which means it is also capable of working in extreme heat (up to 80 degrees C, or 176 degrees F) and extreme cold (down to minus 20 degrees C, or minus 4 degrees F).

From the look of it, RokPak Pioneer Series is a must-have for gadget-toting adventurers. It is like a super tough gadget handbag for outdoorsmen. Though the box is not just for gadgets. Apart from having a cosy place for your smartphone, there’s also room for other gears like GoPro, survival kit, and whatnot. A net separates the other stuff from your smartphone so they won’t threaten to scratch your precious device.

RokPak Pioneer Series Solar Battery Drybox was a successfully funded crowdfunding campaign and it is now available through Indiegogo’s InDemand program, priced at $179 a pop. And oh, did we mention that it made in the good’ol US of A?