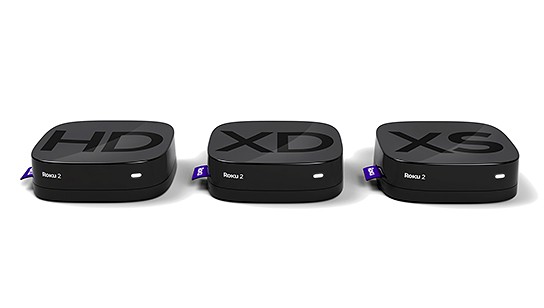 streaming media player isn’t new at all but one that lets you play Angry Bird on the big screen is surely something new. well, that’s what the Roku 2 is about. using its enhanced remote with motion control, you can take control of your favorite angry avian on the big screen. but that just part of its perk, at its heart it is a media streamer that let you access more than three hundred channels of movies, shows, music, et cetera and thanks to its built-in WiFi, it will turn your non-smart TV into a smart one. well, almost. for some unknown reasons that you are tired of the hundreds of channels, there is a USB port to accept music, videos, and photos stored in your external drives. depending which flavor your choose, it supports up to 1080p of full HD video playback too.
[ad#Google Adsense-text-468×60]

three models are available: HD, XD and the XS. all three models are up for grab with retail price starting from $59.99 for the HD, $79.99 for the XS and $99.99 for the top-ranging XS model. the latter is the model to get if Angry Birds is what you are after, as it comes with the said enhance remote with motion control and a free full edition of the Angry Birds game. check out more images and the official press release after the break.

“Roku is the best-selling streaming player on the market because of its simplicity, breadth of content and value. Now we’re setting the bar even higher with Roku 2 – a more powerful platform with new features including casual gaming,” said Roku Founder and CEO Anthony Wood. “We’ve worked closely with Rovio to bring the first full version of Angry Birds to the TV – and best of all, we’re including it for free with the top‐of‐the-line XS model.”

The Roku 2 platform offers nearly 300 channels of streaming entertainment including movies and TV shows from Netflix, Hulu Plus, Amazon Instant Video and Crackle; live and on-­‐demand sports from NBA Game Time, NHL GameCenter Live and Ultimate Fighting Championship; music from Pandora, MOG, Rdio and TuneIn Radio; photos and videos from Flickr and Vimeo; plus news and entertainment from around the world.

A Streaming Player for Everyone
All three Roku 2 models feature built-°©‐in wireless, Bluetooth for connecting a game remote and a MicroSD slot to support additional game storage. The Roku 2 HD player supports up to 720p HD video while the Roku 2 XD player supports up to 1080p HD video. Roku 2 also adds several significant enhancements to its acclaimed Netflix experience, including support for English subtitles, Dolby Digital Plus 5.1 surround sound pass through and up to 1080p HD video quality (on the XD and XS models).

The Roku 2 XS player provides the ultimate casual gaming experience on the TV. Now, Angry Birds fans who love to launch birds at jeering green pigs can enjoy the full version of the game for the first time on the TV, free of charge. The Roku 2 XS includes the new Roku Game Remote with motion control which has been optimized for bird-°©‐slinging action on the big screen. The Roku 2 XS also features an Ethernet port for a wired Internet connection and a USB port for playing music, videos, and photos off of any USB drive.

Pricing and Availability
The Roku 2 HD, the Roku 2 XD and the Roku 2 XS are expected to be available by the end of July for suggested retail prices of $59.99, $79.99 and $99.99 respectively. Retailers include Roku.com, Amazon.com, Best Buy, Fry’s Electronics and RadioShack.

Since all Roku 2 players support casual games, customers will be able to purchase the game remote with motion control for use with the Roku 2 HD and Roku 2 XD players. The Roku Game Remote will be available in the coming weeks as part of a bundle that includes a 2GB MicroSD card for a suggested retail price of $29.99 at Roku.com.

About Roku
Roku is the leading Internet TV platform. Founded by Anthony Wood, inventor of the DVR, Roku was created to reinvent the way consumers experience TV by making entertainment available instantly. The award-°© winning Roku streaming players are renowned for their simplicity, exceptional value and breadth of content. Roku is privately held and located in Saratoga, Calif. For more information, visit www.roku.com.
[/toggle]