folding bike is an excellent solution to address the distances in between public transports’ reach, but they do have compromise. often than not, they have puny wheels which means more effort is needed to cover a particular distance. the Sada Bike designed by Gianluca Sada takes a stab at this age-old folding bike problem by making a full size bicycle foldable. as surreal as it may seem, the Sada Bike is in fact a working prototype and accomplished the feat by going the hubless route. it is a standard size bicycle and uses standard 26-inch wheels, but it dispenses with the hub and multi-spoke combo which are found on standard wheels. the front wheel attaches to the main frame of the vehicle via a set of small wheels within “a specific quick clamping device”, while the the rear appears to have some sort of horizontal V-shaped setup with rollers (or wheels, you if prefer to call them) that presumably provides a tension to hold the rear hubless wheel in place. 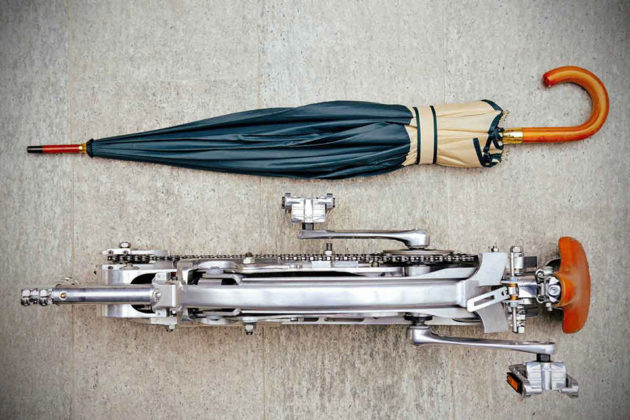 the setup allows the wheels to be quickly disengaged from the frame and with one swift movement, collapse the bike into the size of an umbrella. yes. you heard that right an umbrella. that’s how compact it is. but there is still a pair of wheels, which now looks more like hula-hoops, to deal with. for that, Gianluca dreamed up a specially crafted backpack that will stow away the frame, as well as the pair of hubless wheels, while also providing a space for your belongings. with 26-inch across your back, it will probably make you look like an odd ball (read: Ninja Turtle), but it should work, nonetheless. with the wheels snugged inside the bag, they act as a structure for the bag and as Gianluca suggests, double as wheels to turn the backpack into a trolley which you can bring onboard a flight as check-in luggage. since the bike is still at its prototype stage, specifications remain scant, but we can’t deny the bike looks pretty rad with its retro-futuristic appearance, however, we also can’t help but to be concerned about the eventual weight (and to some extend, rigidity). 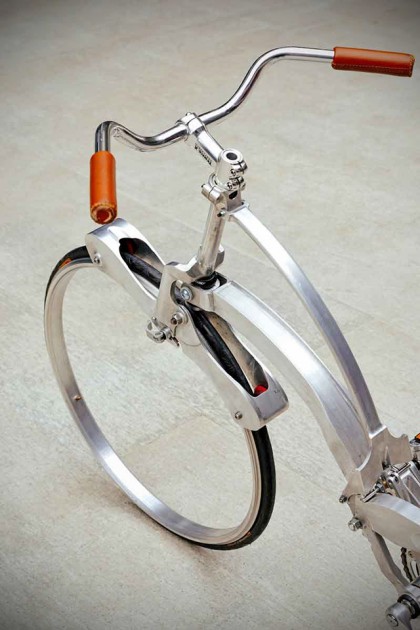 The Sada Bike via Gizmodo