Guns. They can save lives and also destroy lives at the same time. It’s an invention that puts mankind in a dilemma that’s destined never to be solved. However, a Chicago startup with the belief “that a gun does not have to take a life to protect a life,” started out to developed a non-lethal self defense handgun that would serve to protect you and your family in an emergency, while not causing permanent injuries to the assailants, or yourself and/or family in the case of an accident discharge. The product to achieve the desired outcome is known as Salt.

Though it takes on the form of a traditional handgun (not entirely, to be fair), it uses compress air as the propellant as opposed to gunpowder found on traditional gun and the projectiles are special rounds (they really round, like oversize BBs) that are filled with powerful toxin. The gun has an effective range of 150-200 feet and since it uses compressed air (think AirSoft) fueled by a replaceable compressor air canister, the impact is equivalent to the kinetic energy of 50mph fastball. It will definitely hurt, but it won’t kill or maim. 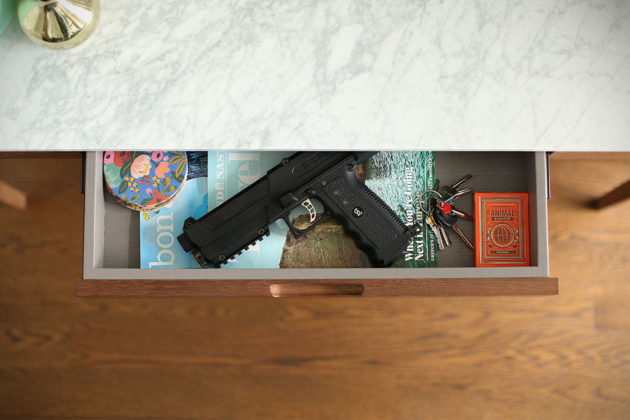 The real defense, however, lies in the Salt rounds. Upon impact, it breaks open and creates a cloud of toxin (of about 4-5 feet in diameter) that will incapacitate the attacker with temporary effects such as blindness, lung constriction and skin irritation. The effects can last up to 50 minutes, which should be more than sufficient time for you to subdue him and call in the police. Also since it is the cloud of toxin that does the job, it also means that any impact in the vicinity of the intruder will be good enough stop his or her advancement. As said, Salt’s effect is temporary and so in the event of an accident discharge, it should cause serious injuries to you and your family.

Want one? Well, here’s the ’tricky’ part: Salt Non-lethal Handgun can only legally ship to 46 states. It’s a no go for California, unfortunately, due to outdate chemical laws and shipping restrictions prohibit it from reaching New York, Massachusetts and Hawaii, even though it is perfectly fine to own Salt in those states. Anywho, for everyone who’s eligible and want one, you can hit the Chicago outfit’s Indiegogo campaign to pre-order yours for delivery as soon as December 2015. Prices range from $299-$349, depending how soon you act on it.

UPDATE: Salt handgun was pulled by Indiegogo, citing the product has “straddled the traditional categories of safety device or weapon.” Those already backed the project will receive their due refund. In the meantime, the team is looking for an alternative crowdfunding site to continue its mission.

UPDATE: It looks like Salt handgun is going out on its own. The outfit behind it, Salt Supply Co., is offering this revolutionary non-firearm, firearm over at its official website at a special price of $297.49.