We knew it! Samsung will not just sit and watch its rival rolls out an awesome Android-flavored flip phone that everybody wants. No way that’s going to happen and so, this other South Korean electronics juggernaut is quick to introduce its own Android clamshell handset which it calls Galaxy Folder. A very apt name, isn’t it? As you know, the phone folds. If folding phone users have any care about specs, they’d be glad that Folder is a little ‘sexier’ on the spec-sheet, which includes a larger 3.8-inch touch display with 480 by 800 resolution, double the RAM at 2GB, a more capable 8MP rear-facing camera, and a larger, removable battery rated at 1,800 mAh. 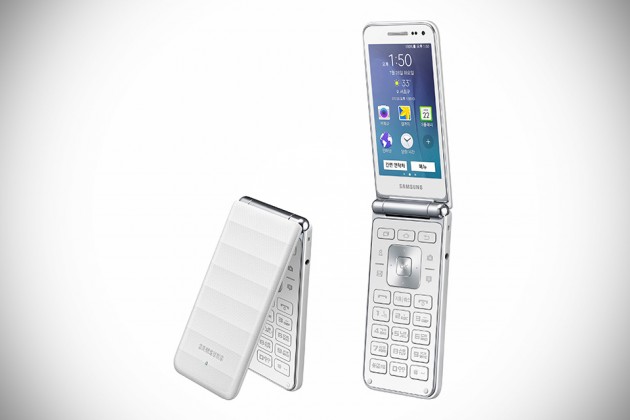 It is, of course, 4G LTE-equipped and runs on, you guessed it, Android 5.1 Lollipop. We love how the Google-translated text reads: “All the functionality of a smartphone with the convenience of a phone folder (probably, it means ‘foldable phone’).” We almost want to agree with that, but that’s only if today’s people can adjust their perception to a small 3.8-inch display after being accustomed to giants of 5 inches or more. However, we can’t deny that it could be brilliant second phone that you can still have your fix for smartphone features. Samsung Galaxy Folder Android Flip Phone will be available through SK Telecom, price at 297,000 Won (or about US$253, based on the current going rate) and it looks like this folding wonder won’t be venturing anywhere outside of South Korea.