When it comes to minimizing distraction during driving to improve safety, cars have received much love with developments like head-up display and advanced collision warning system. Unfortunately, this area is largely ignored in motorcycle. While there are efforts my helmet makers to incorporate head-up display on helmet, they are accessories which will not be a standard on a two-wheeler. This is where Samsung wants to help. It has developed a smartphone-connected display, integrated to the lower portion of a motorcycle windscreen. 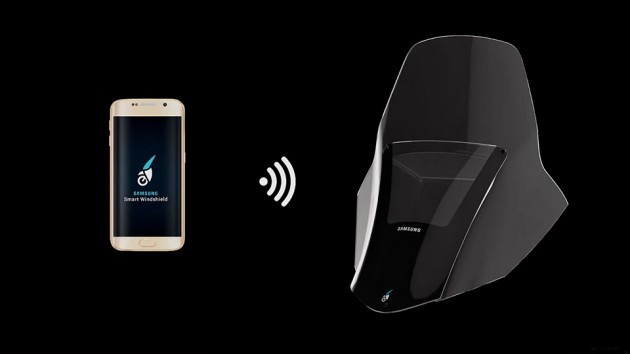 For this development, Samsung partnered with Yamaha to incorporate the head-up display on a Tricity three-wheeled scooter. Using a dedicated app, the rider’s smartphone is connected to the Smart Windshield via WiFi to display a myriad of notifications, including email, text message, and incoming calls. The display can also show GPS navigation directions. Basically, it is a big-ass smartwatch of sort. The idea is to free the rider from distraction by putting the information right before him or her.

Other than the GPS navigation, the windshield appears to be nothing more than to satisfy the rider’s curiosity of the incoming notifications and who’s calling, after which the rider can decide if he or she wants to stop to response to the notifications or call. Though, the app also allows for automatic response to calls by sending a text reply such as “I am riding, call you later.”

To be honest, when you are riding, there’s really nothing much you can do because you have to keep your eyes on the road and hands on the handlebar for maximum safety and control. It is an important development, nonetheless, since it takes the curiosity out of the rider, so the rider can stop wondering what are the notifications and with less of such wandering mind means less distraction which is vital when riding.