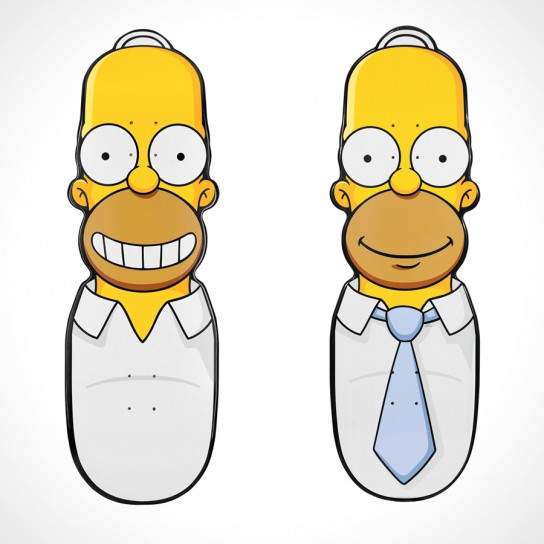 strange as it may sounds, your love for that yellow animated characters may just want you to skate along with it. yea, we know. Bart is the one on the skateboard but that doesn’t mean the rest of the family can’t appear on the skate deck as well. we are talking about skate decks with graphics (and some, shapes) inspired by those irritatingly lovable yellow characters. our favorite gotta be Homer Simpsons, though Bart takes a special place in our hearts. offered to you by long-time skateboard specialist, Santa Cruz and currently available in six different designs that include more regular deck shape like the Simpsons Homer Face Deck, Simpsons Bart Toybox Deck, Simpsons Bart Slasher Blue Deck, and the Simpsons Homer One Deck and the more detailed (or oddly shaped deck, if you like) like the Simpsons The Homer Deck and wait for this, the Simpsons Marge and Maggie Deck set. the latter is the cutest among the lot and comes in two sizes: Marge deck measures 10.3″ x 37.7″, while Maggie deck measures 10.3″ x 20.5″. the Santa Cruz x The Simpsons Skateboard is available without trucks and accessories with a starting sticker of $66.95 a pop. check out more images after the break.