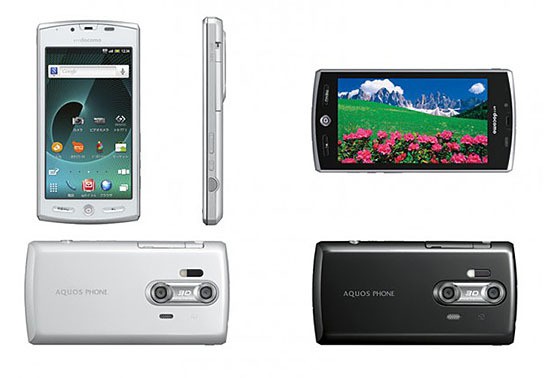 if you are a 3D fanatics, then you will be pleased that Sharp has unveiled it latest 3D phone under its AQUOS brand name. dubbed the Sharp AQUOS SH-12C, this Android 2.3 powered smartphone sports two 8-megapixels CMOS cameras that enables it to capture still images and video in 3D. the phone is capable of 3D content playback that’s viewable without the need for 3D glasses.
[ad#Google Adsense-text-468×60]

connectivities include HDMI out, microSD card slot, WiFi with tethering capability, GPS, Bluetooth and the much forgotten infrared. the phone also features e-wallet functionality and a build-in digital TV tuner. well, i guess this is as much as we know up to this point, though we would very much love to hear what’s the processor used and how much memory it will have for this device. you know, with so many ‘taxing’ functionality, you got to be certain that the hardware will be up to handle them.

the Sharp SH-12C AQUOS Phone is slated for release in Japan on the May 20 and buyers will have a choice of either black or white version. no words on the pricing though or whether this phone will be made available internationally.