There are a lot of things to like about Plastics Engineer and Graphic Designer Jono Williams’ Skysphere. The Kiwi’s creation towers at New Zealand countryside and worthy as the treehouse (read: man-cave) for grown ups. Speaking of treehouse, Jono did previously built one from donated materials and stuff pulled from the trash, but he soon realized treehouse is not a practical solution since it is susceptible to Mother Nature’s wrath and not to mention, tree growth. So the decision was made to go with steel structure. Instead of relying on tree to be elevated, Jono’s Skysphere is self-supporting, planted on a carefully calculated concrete foundation and stands a cool 33 feet off the ground. Couple that with a full 360-degree unobstructed view, the Skysphere could only be described as every man’s dream habitat, albeit in tiny proportion. 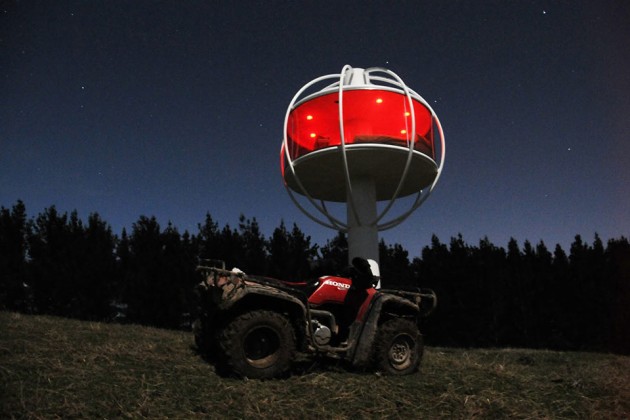 While circular room space is deemed a nightmare for interior decoration, Jono solved that with custom curved furniture, which includes a couch with integrated beer dispenser (refrigerated, naturally), a queen size bed and a two-seater. On the inside, it has the essential electrical equipment and fittings, including adjustable multi-color LED lighting, a Miracast projector, and a wireless sound system – all powered by custom solar strips mounted on top of the structure’s vertical hoops. There’s no plumbing though, which means it has no bathroom but according to the mastermind, he plans to build a small bathroom in the trees near the tower. 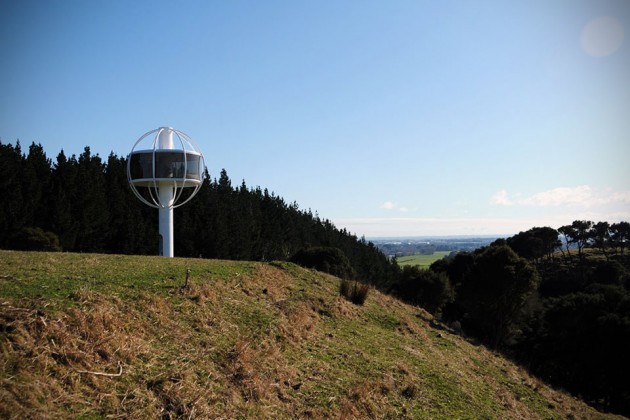 And did we mention that it is mostly smartphone-controlled? Yup. It is. Everything from the lights to the couch-fitted fridge can either be controlled via a smartphone app or voice commands. Access to this 270 square-foot circular, suspended man-cave is through a biometric fingerprint-secured motorized door and up a set of welded rungs inside the hollow supporting column. Hydraulic lift was considered but Jonos had to drop the idea due to the added costs and besides, he’s totally cool with climbing ladders. There are two more doors in Skysphere: one for accessing to the main floor space and the other, gets you onto the roof for some spectacular night sky view.

With Jono’s design, it also overcame an age-old treehouse problem: the lack of windows to appreciate the surroundings. The Skysphere was built at a cost of $50,000, but that’s just material cost alone and does not include the 3,000 man-hour Jono had devoted into the project. And before you start searching for the buy button, well, it is not for sale, at least not yet. Jono does not eliminate the possibility that it will be on sale in future. 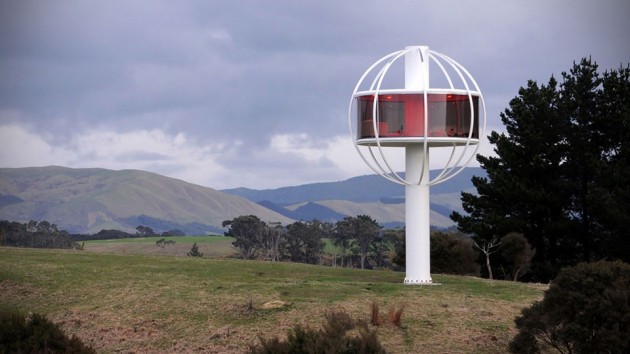 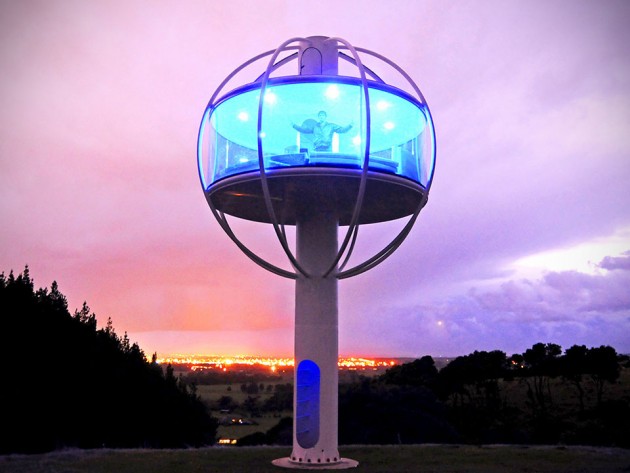