The idiom there’s no smoke without fire was based on the fact that where there’s smoke, there’s usually fire. But we are not here talk about the idiom. We are here for the literal meaning, which is happens to be the basis of how most fire alarm works. The alarm only trigger when smoke reaches it, but by then, fire may have already broken out for quite a while and it may be just too late to save lives and property. However, researchers at the Shanghai Institute of Ceramics, Chinese Academy of Sciences, have a solution to this fiery issue – starting with a new kind of wallpaper.

Wallpaper is a good approach because, it is something that adds to the aesthetic as opposed to the obtrusive fire alarm or smoke detector. Researchers found out that an inorganic component exists in bone and teeth called hydroxyapatite is has pretty darn good fire resistance properties. The problem is, in its unadulterated form, it is extremely brittle and lacks of flexibility. However, researchers found that by creating ultra long hydroxyapatite nanowire with ultra high aspect ratios result in it becoming highly flexible and stronger. 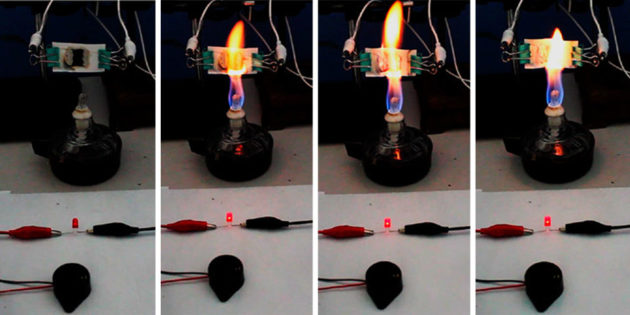 With this creation, wallpaper based on hydroxyapatite exhibits paper-like qualities, such as foldability, while retaining excellent fire-resistant trade, thus making it perfect for preventing fast spreading fire in homes. But being flexible and fire-resistant are just half the story. The scientists also added graphene oxide thermosensitive sensor, by the way of droplets of graphene oxide ink mixture, in the mix. The result? A flexible, fire-resistant paper that is also a fire alarm.

What happen here is, the ink mixture serves as an electrical insulator that, under non-fire situation, inhibit the flow of electricity. But it quickly becomes conductive when exposed to high heat and thereby, completing a close circuit where electricity passes through to trigger the alarm. Woah. That’s kind of mind-blowing, don’t you think? Imagine the peace of mind we can get knowing that the beautiful wallpaper will not only discourage fire from spreading rapidly, but it will also trigger the alarm in matter of seconds after being exposed to flame.

Perhaps the most exciting thing about this development is the prospect of having a fire safety system in your home hiding in plain sight. That, my friends, is the future. If you are interested in this topic, you can read up the material in the paper Fire Alarm Wallpaper Based on Fire-Resistant Hydroxyapatite Nanowire Inorganic Paper and Graphene Oxide Thermosensitive Sensor published on ACS Nano.