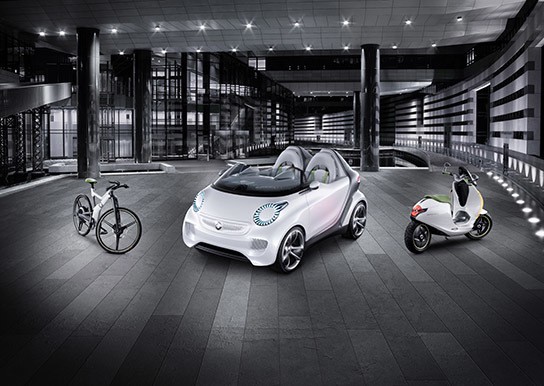 ahead of the Geneva Motor Show, Smart unveils its concept performance EV in the form of the Forspeed. the intriguing part of the Forspeed is has, or rather it does not have what most cars have – its missing a roof, side windows, external door handles and it has a low wind reflector in place of the traditional windscreen.
[ad#Google Adsense-text-468×60]

powering the Forspeed is a 30 kW magneto-electric motor mounted at the rear which is capable of propelling it to 60 km/h in 5.5 seconds and reaches a top speed of 120 km/h. the Forspeed also features a power-on-demand concept where at a touch of a button located at the center console activates a boost function, giving the vehicle an extra 5 kW of power for a brief period of time. much like the nitrous boost in its petrol car counterpart, this brief boost will comes in handy for over-taking maneuvers.

battery is in the form of lithium-ion, rated at 16.5 kWh which is good for 135 kilometers (84 miles) range. charging is via conventional 220 volt socket. instead of the usual front or side charging which is common among EV of today, the Forspeed has its charging port located in the middle third brake light, behind the Smart logo – a simple push opens up the logo, revealing the charging port of the vehicle. a quick charge from 0 to 80 percent capacity takes 45 minutes. 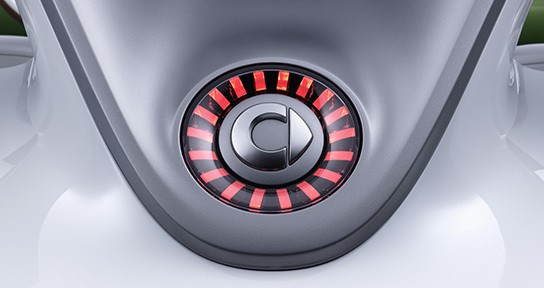 Forspeed features photovoltaic cells built onto the wind deflector that feed solar power to the on-board electrical system which helps in charging on the onboard smartphone or contributes to the overall electrical system. this particular concept comes in a high-gloss white metallic paint job, and features striking LED front and rear lamps design integrated with the indicator lights. another particularly interesting concept was the numerous holes in a honeycomb pattern which is not only aesthetically pleasing but also serves as air inlets for the vehicle.

at the center of the wind deflector is an air inlet which can route air from outside into the cabin via the central outlet located at the center console, giving the interior a boost of fresh air. the seats are of leather in a one-shell design coupled with four-points seat belt system, for both driver and passenger. opening of the doors is through the use of a strap-like internal door handle and the lack of windows ensure that you can always reach out to open the from inside out.

the electric parking brake (commonly known as handbrake) exists centrally between the driver and the passenger, and took on the shape that resembles the lever used to pull in the landing gear of aircraft. a block of ten LEDs built into the center of the instrument panel, shines through the translucent paint, showing the battery charge status of the EV. the Forspeed has no retractable roof like sports car of today but it does sport a manually deployed two-piece tonneau cover that can be stretch over the interior and fasten to the body with straps to protect the interior and yourself from the elements. 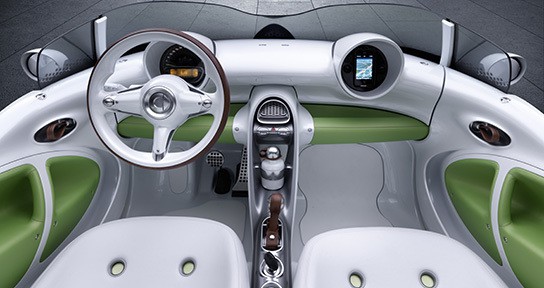 the Forspeed is perhaps the first car to be conceptualized to withstand the elements even without the tonneau on. the interior is capable of withstanding punishment from the rain and the water drainage channels in the floor of the vehicles ensure the water can be directed out of the car, saving the car from becoming a mobile bathtub. water drainage is even extended to the seat surfaces and every aspect of the interior are waterproofed which promised to be in a functional state even when both the driver and passenger are completely drenched.

drawing its inspiration from classic aircraft construction, the cockpit reminisces of an aircraft cockpit where the driver plays the part of the pilot and passenger, the co-pilot. staring at both are two separate round turbine-like instrument clusters. the driver has the speedometer and other essential info upfront, while the passenger has the power of communication and navigation through the use of a smartphone mounted in a holder that can swiveled up to 90DEG and moved towards the driver.

constructed out of glass fiber-reinforced plastic (FRP), this lightweight rear-wheel driven EV of the future sits on 18-inch wheels wrapped in 205/35 R18 and 235/30 R18 rubbers for the front and rear, respectively. the Forspeed is truly a car of the future which we certainly hope will be built. lately, we have found ourselves hoping concepts that we featured to be built but we have to forgive ourselves for making such ostentatious wishes, for all these concepts that we came across in late are so drool-worthy. don’t you think so?