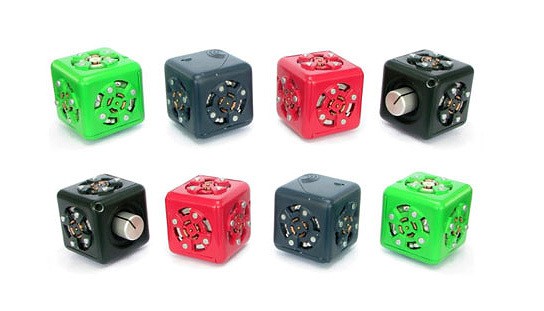 the Cubelets is a robot construction kit developed by Modular Robotics, a spin-off from Carnegie Mellon University, which lets you construct your own robot using a combination of task-orientated robotic cubes. essentially, there are three categories of robotic cubes in this kit, namely the action blocks, sense blocks and the think/utility blocks. for example, snapping an action block like the drive unit, with a sense block such as the distance sensor unit and a battery from the think/utility block, gets you a robot that moves when the sensor detects your hand moving towards it. of course, with a bit of creativity, you could get a more a complex bot going. check out the teaser video on it works after the break.

currently, the beta test kit of 100 units are sold out but it will be back soon and has a retail price of $300. not exactly cheap but i guess the hours of fun you will have with this hi-tech toy far outweigh its price tag. well, at least it is to me. blame it on my love for toys and geeky gadgets. for $300 you will get a standard kit consisting of 20 blocks from all three categories of function essential for you to start building your own robots. recommended age for this robotic toy kit is 8 years and up. damn. why didn’t i have such cutting edge toys when i was a kid? all i had was green toy soldiers just like the ones you see in Toy Story.