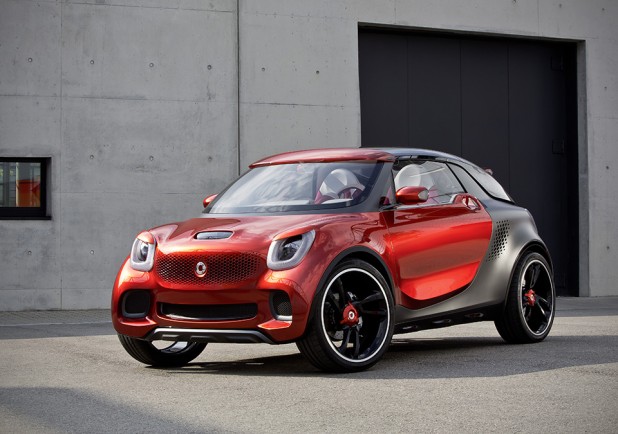 German automobile maker smart is usually viewed as a cute car maker – thanks in part to its popular ultra compact urban car, fortwo but it might just break that stereotype with the smart forstars, a bold concept that is anything but cute. in fact, it extrude a sense of manliness with its SUV-like ruggedness, presented in a futuristically designed package and for that, smart is calling it the Sports Utility Coupe (SUC). driven by an electric unit based on the smart fortwo BRABUS electric drive, its magneto-electric motor, juiced by a 17.6 kWh lithium-ion battery pack, delivers 80 horsepower (60 kW) and 135 Nm (100 lb-ft) of torque, and is capable of a top speed of over 130 km/h (80 mph). key features include seats for two with a lot of room for more (stuff, not people), an expansive glass roof that reveals the stars of the night, electrically-operated lower tailgate, an integrated rear video camera that works with your smartphone, huge 21-inch rolling stocks wrapped in Michelin 245/35 ZR 21 sports tires, and a futuristic leather-clad interior that looks like it has been taken out from a sci-fi movie such as I, Robot. interestingly, this smart has a projector built-into the bonnet’s non-functioning ‘air scoop’ (yes, it’s on the outside) that operates via Bluetooth from an iPhone for projecting movie to share with friends, and wrapping up the drive-in cinema-like experience is a high-quality sound system with additional speakers in the ventilation openings behind the doors. well, we know the last bit sounds a wee crazy but hey, we have seen even more insane customizations on Pimp My Ride – at least, if will be factory fitted – IF the smart forstars ever becomes a reality. hit the jump for a gallery of the smart forstars concept.