Do you know that there are human beings who can see sound? So, it is absolutely nothing wrong to say “did you see that sound?” True story. While some folks actually see sounds as colors, chances are “these folks” are not you and me. But with the Soundcam Handheld Acoustic Camera, both you and I can be superhuman with the ability to see sound. Soundcam is the first handheld sound camera that lets you experience seeing sound. Soundcam is, well, like a camera that capture sound and present it in visual form on a display, thus it literally lets you see sound.

This shield-like device is features 64 microphones, an optical camera, an integrated data acquisition and analysis system and a a touchscreen display and control unit – all working to capture sound so you can see where the sound a particular sound is coming from and its associated data.

Here’s how it works, straight from the horse’s mouth:

“Sound propagates as a wave at a certain speed, which means that sound needs a certain amount of time to propagate from a noise source to each microphone of the array. Depending on each microphone’s position, the sound wave will need varying travel times. The algorithm running on SOUNDCAM analyzes these time delays and calculates accurate acoustic pictures and videos in real time. 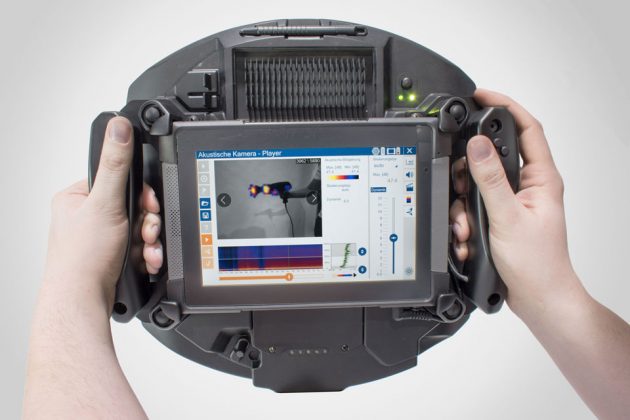 So, it can turn sound into images, but what is it really for? Well, the applications are wide and varied. It can be used to localized sound that has been bugging you for like eternity. It can be use to pick up sound leakages from supposedly quiet machinery or appliances. It can be use to analyze environment noise, traffic noise, aircraft noise, and whatnot. As you can see, the application really is wide, but at 3,999 euros (US$4,884) a pop, it is probably not for everyday consumers. However, Soundcam is considered a steal when compared to traditional acoustic cameras that may cost upwards of €100,000. That’s not to mention some of those are hardly known to be this portable.

All images courtesy of CAE Software and Systems.