Two months. That’s how long to the most anticipated movie of the year, well, at least for fans of Star Wars. At this point, it won’t be a surprise to the see the theatrical poster, which Lucasfilm has officially unveiled yesterday. But that’s not all. The Disney-own film studio has more news that will set the Star Wars fever in motion. But first, a little something about the poster. In the tradition since Episode I, the latest Star Wars instalment’s poster also plays on the lighting, but unlike Episode I-III’s theatrical posters, where it weighted heavily on the dark side with its orange/red mood, Star Wars: The Force Awakens theatrical poster showcases an awakening of the dark side and the light. Overall, it looks a lot less gloomy. Have a look after the post.

In addition, an exclusive new look at the film in the form of an official trailer will be screened during ESPN’s Monday Night Football tonight. That’s not all; the poster and the trailer are just half of the story. Tickets for the movie will go on sale today “for showings in theaters across the globe” – two months ahead of the official screening. There are other events and exclusive giveaways to commemorate the occasion too, including Star Wars Marathon Event (movie marathon, that is), collectible ticket featuring unique Star Wars: The Force Awakens art, AMC-exclusive Star Wars print, and exclusive RealD 3D Star Wars glasses – just to name a few.

Clearly, Star Wars: The Force Awakens is the biggest event of 2015 and Disney/Lucasfilm is determined to make it so, to the delights of fans around the world. If you reside in stateside, do hit up Star Wars official website for a list of events and giveaways. 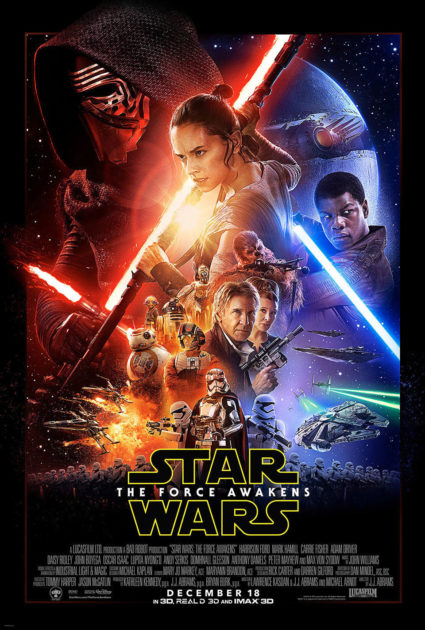