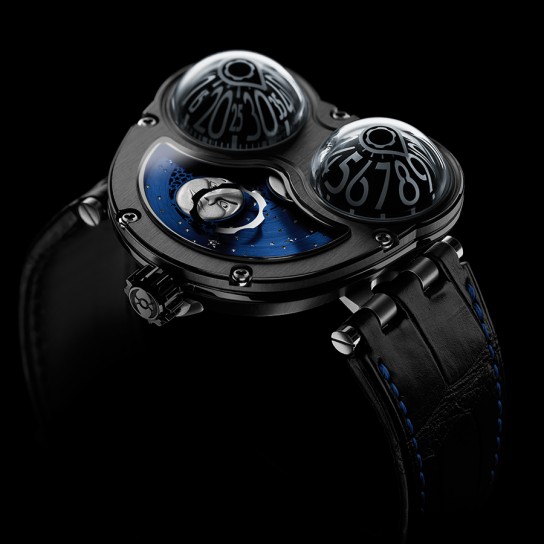 having a time piece that just tell time is rather passe these days. a wrist watch has matured to become a symbol of status, an art piece and as a piece of jewelry. for those who have less cash to spare, there’s always the funky TokyoFlash watches but for those who has a burgeoning bank account hidden somewhere in the Switzerland, there’s the more exotic time piece like the Stepan Sarpaneva for MB&F HM3 Moonmachine to show off your wealth and exquisite taste. as the name implies, it is a derivation of the HM3 Frog and a result of the collaboration with Finnish watchmaker Stepan Sarpaneva. the watch showcased Stepan’s distinctive touches including the moon face, the laser-pierced stars that form the northern stars and constellations, and a Korona case. in order to accommodate the Moonmachine, the Frog has to be reworked, which includes re-orientating the signature domes of the HM3 to be perpendicularly to the wrist and developing a new gear train to drive the domes. the HM3 Moonmachine is available in three variations: titanium case with white gold moon faces backed by light blue sky, black titanium case with white gold moon faces in a dark blue sky and red gold case with red gold moon faces in an anthracite sky, with each variation having a very limited production run of just 18 pieces. expect to shell out a good $98,000 for each. click through for a few more larger look.

MB&F via Hypebeast via HODINKEE