not only will Subaru be pulling the wrap off the next-generation WRX at the 2013 Los Angeles Auto Show, but it will also be showing off the Subaru Legacy Concept which will let auto enthusiasts have a peek into the future design direction of the company’s flagship model. with the emphasis on the design direction also means detail specs are not known until its official unveiling on November 20 press event at Subaru booth. however, the concept will be definitely be sitting on the proven Symmetrical AWD (S-AWD) and Subaru Boxer engine – both which are technologies Subaru has built its name over past decades. btw, next year also marks the 25 years of the Legacy, which means that a new Legacy’s arrival in 2014, probably based on the design direction expressed here, is imminent. the 4,930 mm long four-seater concept will have a 2,880 mm wheelbase and rides on massive 21-inch wheels with 265/40 ZR21 rubbers.

coated in an “Ocean Silver Metallic” paint job, the Legacy Concept sports an imposing front end with the iconic grille which we first saw on the VIZIV Concept, flanked by a pair distinctive headlamps. other expectations include an odd vertically long-shaped dual tailpipes, functional rear diffuser, brown base tone leather interior with blue accents, smart device-enabled multi-function display, 3-spoke steering wheel combined with a shifted angled to the driver for “a more sporty driving feel”, and Subaru’s advanced driving assist system, “EyeSight”, complete with head-up display on the front window. we shall not bore you with the design speaks and instead, invite you to scrutinize the limited images for yourself, which you can find above and after the break. also, do keep your eyes peeled on the official launch website HERE for more information. 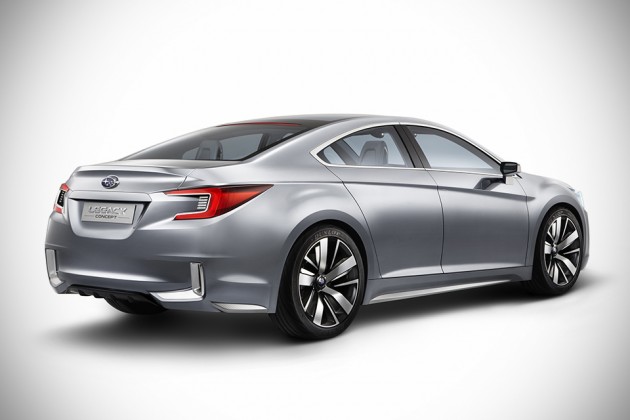