When Peter Rader and David Twohy wrote Waterworld (Universal Pictures, 1995), they probably did not imagine it would actually happen. Well, it did, but the good news is, there is no need to raise the alarm. Apocalypse is not upon us, yet, because, real-life “waterworld” only occurred in Brazil in early February when an unusually heavy downpour flooded the Olho D’Agua river in Bonito. The resulting flood submerged the jungle around it, but unlike most river floods, which are murky in nature, the overflowing water from Olho D’Agua river was super clear. 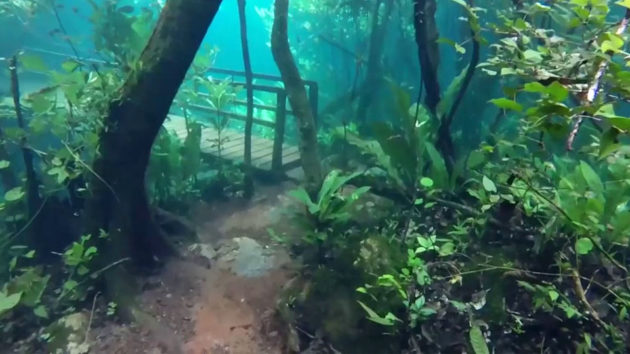 The water was so clear water that you can clearly see the hiking trail, the vegetation, footbridge and all. It looked so surreal, like something pulled straight out of a fantasy movie. Seriously, we wouldn’t have known if not for Waldermilson Vera, a park guide at Recanto Ecologico Rio da Prata, who recorded this viral video which has since viewed over 2.2 million times on YouTube. The 33 seconds video posted on February 19 is truly mesmerizing.

According to Waldermilson, it was a rare occurrence and the river returned to its normal level at the end of the day. You can watch this real-life “waterworld” video embedded below, but if do watch it, don’t blame us if you can’t stop watching it.