Ah… things that people are willing to do to save money. Not that it is bad thing to be thrifty, but it just goes to show how creative and the risks people are willing to partake in the name of saving a few dollars. Such is the case of Scott Holt, a self-described “struggling comedian.” he decided that he should wade across New York’s Hudson River to get from Jersey City where he live to his a meeting place in Manhattan. And his transport of choice? A paddle board. 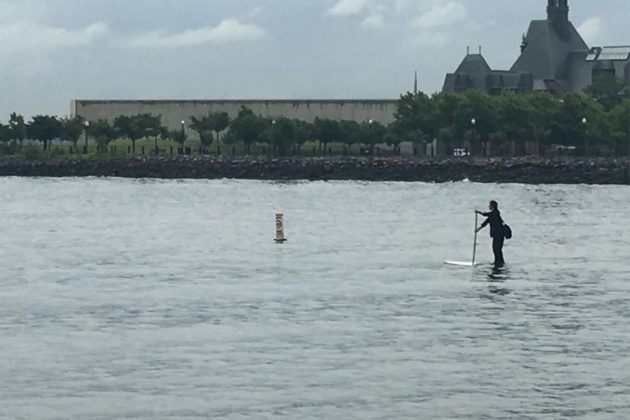 So, he did while all dressed up for an important meeting. When we said all dressed up, we do mean all dressed up in business suit and all – complete with a brief case too. But those are it. There was no safety leash or whatsoever. It was just the man and his suit, the briefcase, and the paddle board and the paddle. Notwithstanding the rough wind and choppy water of that day, Holt made it in just 30 minutes all well and dry, except for a little “squish” in his shoes because, water managed to get to the kicks when the river became a little too rough at times.

Anyways, in the process, Holt saved himself a few bucks, many curious stares and a police officer waiting for him at a close out water taxi dock where you chose to get ashore. No biggie though. He did not get arrested. The police officer was just puzzled as to why anybody would do that. However, one of the employees at New York Waterways weren’t quite amused. Not surprisingly, Scott gotten his few minutes of fame after pulling this crazy stunt.

He said he might do it again because, after all, he did made it there dry, didn’t he? But some words of advice to everyone else out there: don’t go trying to replicate what Holt did. I’d say he just got lucky. Imagine having to deal with rough wind, choppy water and avoiding other watercraft all at the same time. Man, that must have been exhausting! Keep going for a video of the man-in-suit in the act captured by passengers onboard a New York Waterway Ferry.