Mention wearable keyboard, it is sure to conjure up an image of a miniaturized keyboard strap to the forearm, but the Tap Strap wearable keyboard is anything but. In fact, it looks and sounds like something pulled right out of a sci-fi movie. Instead of physical keyboard, it is, well, just a strap with holes for your fingers. It is designed to be worn on your hand, on your digits and it is loaded with sensors to sense your tapping action, letting you tap on any surface, even on your head, to starting typing. Sounds pretty magical, isn’t it? The company behind this revolutionary input method, Tap Systems, described Tap as “a fast, accurate and eyes-free” typing.

Well, it is indeed eyes-free, but only if you can remember the entire combination of taps required to form each individual character, punctuation, numeral and special character. But not too worry, instead of dropping a manual that tells you what combo of taps produces what, Tap Systems has created an app, dubbed TapGenius, that will teach you the trade of tapping with Tap with the help of music and games. Tap Systems said it will take about an hour for a person to grasp this new method of typing and we can imagine if a person picks it up, typing could be a fun thing to do again. 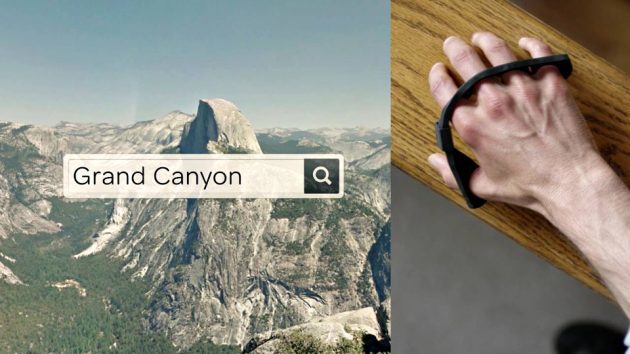 The device is designed to be ambidextrous; it can use either on the left or right hand for one-hand typing, or two can be worn, one on each hand, for two-hand typing. It is void of buttons, which means turning on or off requires tapping action too. As far as future tech is concerned, this ranks pretty high on our chart. According to the company’s press release, Tap is available to select beta users in San Francisco Bay Area as we speak, but the rest of us, Tap will only be available later this year.