if the Brick Retro Mobile Phone were to surface, say about ten years ago, we wouldn’t even look at it because at that time, smartphone were pretty obscured and so were mega-size handsets, but now, things are a little different since phone has been growing in size and so i guess Brick Retro Mobile Phone does have a place in this modern, smartphone-invaded society. drawing inspiration from the grand daddy of cell phone, the Brick has, well, the size that befits its namesake and you can actually own one without going back in time, or suffer from just 10 minutes of talk time with a insane 10-hour charging time. no. none of those. it is a modern iteration by London-based Binatone Global, touting a 1.77″ LCD TFT display, 14 hours of talk time and a whopping one month standby time (three for the bigger model).

there are more to it. it also has, wait for this… 2G radios with GPRS (!), along with SMS/MMS functionality, stores up to 100 messages, built-in phone book for up to 300 contacts, and other modern stuff like SD card slot, LED flash light (!), back-lit keypad, built-in music player, generously-sized speaker, FM radio, clock with alarm function, calendar, calculator, and most importantly, Snake to keep you occupied when there’s really nothing to do. oh yes. Bluetooth comes as standard, allowing you to use it with Bluetooth headsets if you are too shy to whip the giant out, or you can use it as a Bluetooth speaker, so you can tell your friends that’s not a phone, it is my Bluetooth speaker. instant, conversional piece.

available in three versions: the Brick Original ($69.99), the Brick Power edition ($99.99), and an upcoming Brick Home ($79.99). the latter is actually a DECT cordless phone for home use, featuring one week standby time and an operating range of over half a mile. awesome stuff. conversation starter comes as standard for all models. 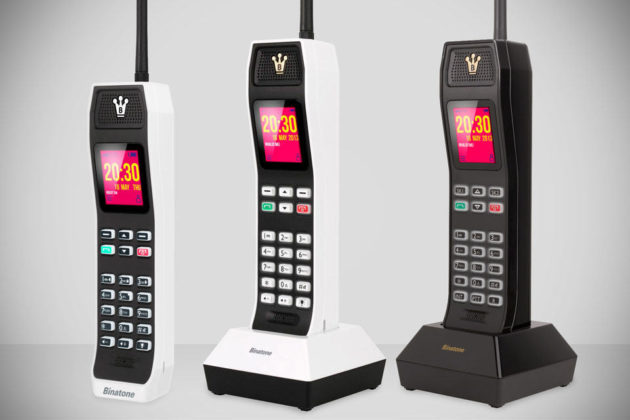