do Bruce Wayne read books? if so, he probably would not have The Dark Knight Bookshelves in his opulent pad to give away his alter ego (well, maybe he would but in his other pad – the Batcave) but lucky for us, mere mortals (btw, we know Batman aka Mr. Wayne is also a mortal but a filthy rich mortal), we can have this made-to-order, unofficial bookshelf to remember the movie by. in creating this awesome shelve, Etsy seller Fahmi Sani, drew his inspiration from the logo as used in Christopher Nolan’s The Dark Knight trilogy. honestly, the as far as proper organization or placement of the books go, this shelf probably won’t win any beauty contest but if you look at the abstract, arty side of thing, it might just be super cool. we look how Fahmi chose to split the shelf in halves and of course, we also dig the tiny protrusions scattered around the shelves. the shelves measure 56 x 82 centimeters (22 x 43 inches) and they are strictly made-to-order items and each set is priced at AU$267 (about US$277). walls with hairline cracks not included – obviously. another look after the break (click on images for larger views). 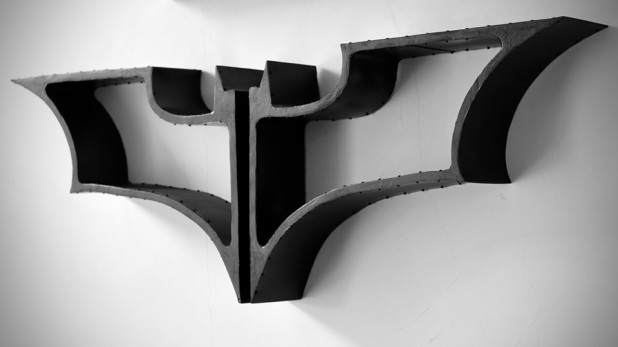