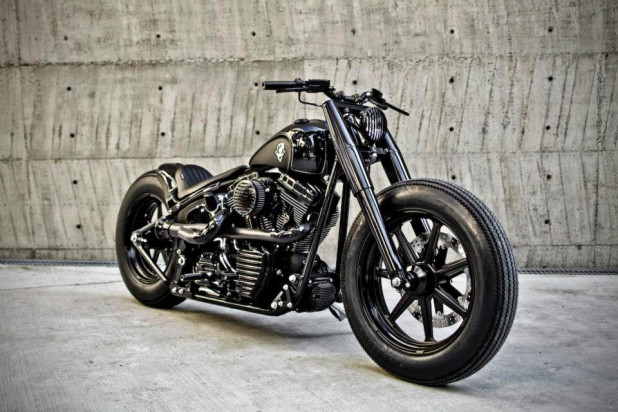 Harley-Davidson is pretty much a manly thing but if that isn’t enough, perhaps a stealth makeover should up its manliness ante by a notch or two. well, in this case, stealth does not really mean coating the bike with radar-absorbing material (you know that right?) but it is more of an all out dark, black treatment plus some custom parts and to this end, no one does it better than Winston Yeh’s Rough Crafts whose speciality is serving up custom Harley (and parts). his latest example is this Harley-Davidson Fat Boy Shadow Rocket that’s based on a 2002 FLSTF Softail but do not mistaken this two-wheeler for just a mere color change: this beast is chopped, trimmed and fitted with custom parts including spanking new sheet metal throughout the bike (gas tank, fenders and all) and features Progressive Suspension springs and shocks, forged aluminum RSD Black Ops wheels (18-inch front; 16-inch rear) and Performance Machine brakes. engine-wise, Yeh has chose to leave the internal untouched while providing custom touches to its air cleaner, bars, mid-set controls, lighting, seat (will you look at that saddle?!) and exhaust system. it is one heck of a ride that most man would not be able to take their eyes off. take a closer look at this awesome ride in the gallery after the break.