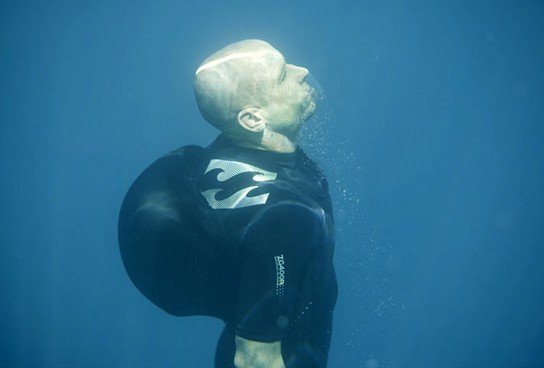 in the air, we have parachutes as a safety measure but what if you were pinned down by big waves in the water? Shane Dorian, one of the best big wave surfers on the planet has the answer for that. his invention is the world’s first inflatable wetsuit. think of it as a parachute for water but instead of bringing you down safely, it aims to bring pinned down surfer (or anyone for any reason) safely to the surface. this innovative idea struck Shane back in 2010 where he was nearly drowned when he was pushed down 25-feet below the surface, only to be held there by two more big waves. with this idea in his head, Shane contacted Billabong wetsuit designer Hub Hubbard and the rest is history.
[ad#Google Adsense-text-468×60]

the inflatable wetsuit consists of an air bladder with a replaceable CO2 cartridge integrated into the wetsuit. it has a pull cord, much like a parachute and tucking the pull cord inflates the air bladder, thus sending the wearer back to the surface in a jiffy. clever idea but unfortunately, this life saver is not commercially available, and there is no word if it will eventually be available. i think it really should, for it is a sin not to make such a wonderful life saver, or any life saver for that matter, available. check out a video of the inflatable wetsuit in action and a short interview with the man himself. anyway, just a side thought: is Shane or Billabong going to stick with ‘Billabong V1 Wetsuit’ name? i thought it could use a much cooler term like paraflat, or paraqueous? i am just saying…