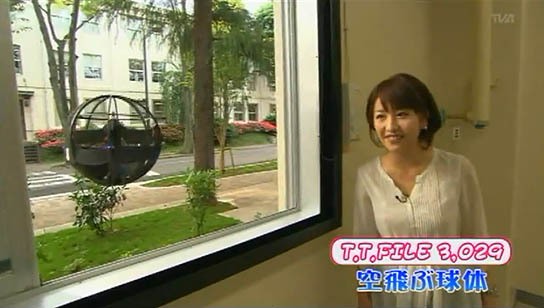 object like this tends to go viral overnight, so why didn’t i post it earlier? cos’ there are just way too many cool things to be featured and hence, i have to work on Sunday to make sure i can cover it all and on this particular Sunday, i managed to find the time to slot this in. good answer? never mind. anyway, this particular flying spherical ball is the work of Japanese Ministry of Self-Defense, which they dubbed it as ‘Ball-shape Flying Object’ (loosely translated) and is touted to be the world’s first truly spherical flying robot. don’t underestimate its harmless look as little ball, about the size of a soccer ball, is capable of zooming around at a neat 60 km/h (37 mph). it is also equally capable in narrow spaces and it can land smack on the ground, rolling to a stop while absorbing the impact. pretty cool, huh? check out a video clip of this aircraft in action after the break.

this radio controlled flying object uses only a single propeller for the required thrust while eight separate wings control its flight. it is designed to mount a camera or sensors, presumably for surveillance application. just imagine what this ball could do if combine with a Kinect, just like what STARMAC did with the quadcopter. awesome and creepy at the same time.

NOW READ  Rheinmetall Panther KF51 Main Battle Tank Is More Than A Tank. It Is A High-tech Battle Control Center