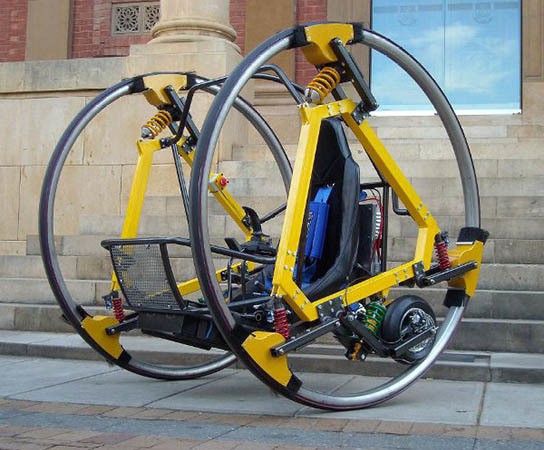 what’s two wheels and you sit inside (and between the two wheels) as a rider? it’s called the Electric Diwheel with Active Rotation Damping (EDWARD). Diwheels aren’t new but this is the first purely electric version which includes a host of electronics and controls to keep it drivable up to 40 km/h. check out a 5 minute plus video after the break but some words of warning before you proceed with the video: some part of the video can be rather nausea-inducing, so watch with caution. don’t laugh, it’s true.
[ad#Google Adsense-text-468×60]

anyway, back to the Diwheel, this particular version was developed by thirteen students for their honors mechanical engineering project at University of Adelaide, Australia. the students even managed to incorporate an unique feature that allows the rider to drive the vehicle when “upside down”. why would anyone wants to drive upside down is beyond me but i appreciate the technicality and the engineering mathematics (which i failed miserably) that goes into perfecting this machine. well, may be not as perfect but it’s feat, no doubt.