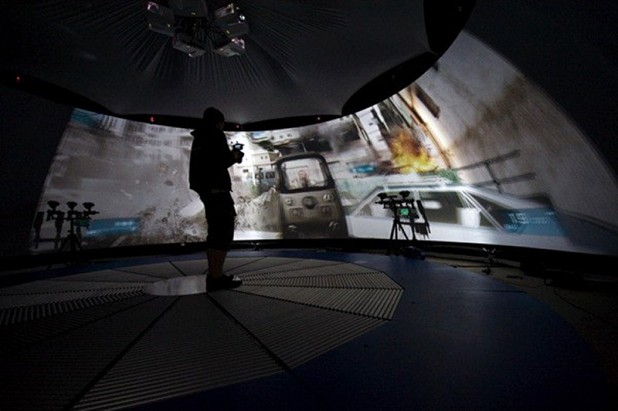 firstly, you can’t buy this but on the second thought, if you have extremely huge pockets (£500,000 to be exact) and a studio with a good space to spare, you probably could get the same folks who did it for The Gadget Show to do one for you. so what am i talking about? i am referring to this awesome first person shooter (FPS) simulator created by a team of design experts commissioned by The Gadget Show. the design team converts a Birmingham studio into an ultra immersive FPS simulator at a cost of £500,000 (about US$800k). the setup includes a four by nine meter video dome, five HD projectors, an omni-directional treadmill, ten infrared motion tracking cameras, a sensor on the user’s gun, Kinect hack for the necessary jumping and crouching actions, and twelve paintball markers. yes, it has twelve paintball guns that will shoot back at you, ensuring the user will get an ultra immersive FPS, if not painful, experience. i can’t say it’s a dream come through but judging from my pass gaming experience, i would probably suffer from lots of bruises after just a single gaming session. that’s how bad my FPS skill is. oh, by the way, the game used is the pre-release level of the Battlefield 3. the show was aired on the October 24th in UK. a trailer and a build & test video of this awesome FPS simulator follows after the break. check it out.
[ad#Google Adsense-text-468×60]

NOW READ  As Much As We Love It To Be, The Pininfarina AutonoMIA Is Not A Driving Simulator