As far as tank design goes, the newest main battle tank of Russia, the T14 Armata developed by long-time tank manufacturer UralVagonZavod, is nothing radical. It looks like what a tank supposed to be (and what a T tank supposed to be), but beneath that thick wall of armor is a rather interesting tech that allows this tank to go unmanned… but only on the turret (at least for now). Yeah, I find it rather odd too. If we read correctly, this means that T14 still needs to be driven by someone into the battle, while its fully automated 125mm main gun can be operated without a gun team. If that’s the case, it is indeed a strange proposition because therein lies a coordination issue. 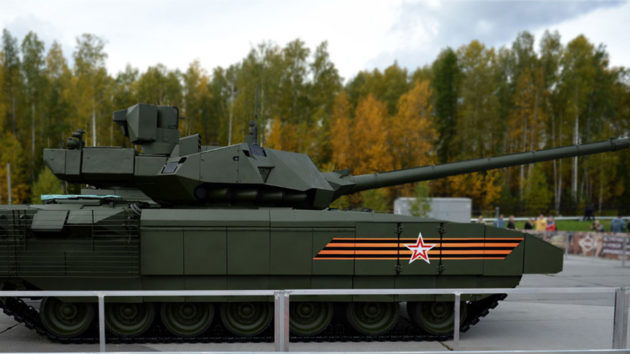 Sure, there’s radio comm to maintain communication, but it runs the risk of running into radio blind spots which can severe the communication momentarily. And momentarily can make a difference between life and death. But that’s just my high-school level of deduction, which may not even be a valid one at all. Anywho, T14 has been in the development for a while now and it made its first official reveal at the Victory Day parade in Moscow last year and this month, the Russian Defense Ministry confirmed a pilot batch of over 100 units which will be used for trials. 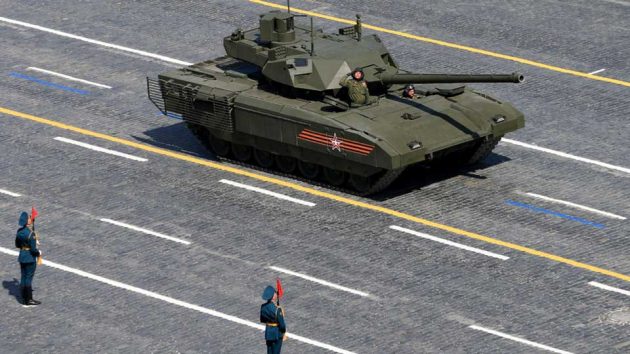 The initial plan was to supply the Russian army with the T14 until 2020, but it is reported that has since been extended to 2025 which will see 2,300 units of this state-of-the-art main battle tank put into service. According to RT, the T14 has a top speed of 90 km/h – a speed that’s over 20 km/h faster than US military’s gas-guzzler M1A2 Abrams MBT. Though it is not known how its targeting system stacks up against the M1. The current version’s 125mm gun will eventually be upgraded to 152mm variety and also, a “completely automated” T14 Armata, which will allow it to be operated remotely, is in the pipeline.

And there’s more; down the road, UralVagonZavod has plan to include a drone to the Armata to, presumably, enable the tank crew to scout forth, improving the crew’s battlefield situational awareness (though, it is not sure if laser target and such is in the wish list). Last but not the least, the Armata Universal Combat Platform, which the T14 is built on, will form the base of other types of armored vehicles, such Self-propelled guns and Infantry Fighting Vehicles.

Source and images via RT