We all know how a drift trike works. You get one up to speed, abruptly turn the handlebar to one side, or tug the ‘handbrake’ to initiate the drift. It is exhilarating but apparently, not to all. Not to Colin Furze at least, the mad scientist British garage inventor who have turned many tame transportations into dangerous ones with jet power. His latest creation is not less dangerous and one that, not surprisingly, involves a pulse jet. Aptly dubbed Pulse Jet Drift Trike, it is a drift trike that up the drift game – thanks to a pulse jet stuck sideway at the rear 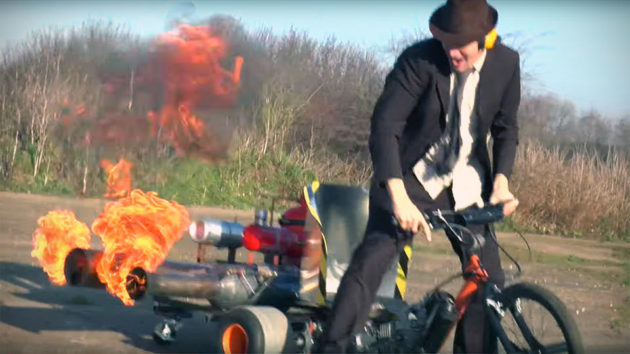 Like the many pulse jet powered contraptions he has created, this thing has dual exhaust that spew fires and glows in all its red hot orange glory that not only provides crazy drifting experience but also creates quite a spectacular light show in the dark. Though it is far more dangerous than his previous creations as the exhausts (or should we call them ‘afterburners’?) are in close proximity to the rider which, depending on the drift and wind direction, it could potentially set the rider, who his the man himself, on fire. In fact, it almost did a couple of times and that’s not to mention to the gas tank was just next to those burning pipes.

All we can say is, this bloke is totally insane, well, in a somewhat good way. Without him, we wouldn’t have know how a jet-powered drift performs. Seriously, the only time we saw jet-powered drift was probably (and unfortunately) a failed aircraft carrier landing by a modern jet that ended in the ocean. Keep going to catch Colin Fuze piloting this crazy drift trike in the embedded video below.