Jet-propelled go-kart is not the newest new, but when it is born out of the hands of a bloke with a portfolio of crazy inventions like retractable Wolverine claws and jet-powered bicycle, then it turns heads and deserve our full attention. Colin Furze is a self-declared British garage inventor and is a living legend of crazy inventions. His latest creation is this Pulsejet-powered go-kart that doesn’t quite need to fire up to impress. Unlike many jet-powered examples, Jet-kart as it is called, is anything but subtle, which I am sure you have already noticed. The Pulsejet-powered consists mainly of chassis works which includes stretching the chassis by 1.5 meters long to accommodate the jet engine that sits right smack in the center, so it won’t be too near and threaten to burn the crap out of the driver who, by the way, is none other than the man himself. 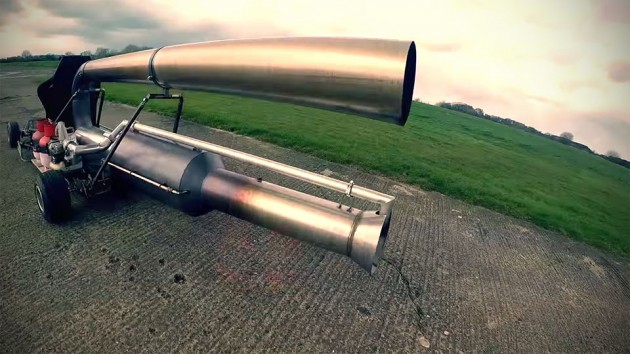 Pulsejet was chosen as the engine of choice as it will run anything that burns and that includes the much accessible diesel and that results in the kart sporting two sets of fuel rails: one for the gas and other, for the diesel. If the mention of jet propulsion on a go-kart didn’t catch your attention, we are pretty sure those two big-ass jet exhausts would already have your attention. Those two runs super hot. You can even see it glowing orange in broad daylight and at night, it kind of makes a spectacular light show, spitting out fire and glowing in all its red hot orange glory. So how fast can it go? 60 miles an hour or 97 km/h and that was probably not even it cos’ Colin ran out of runaway to push it further. I guess he will need a a bigger place where he could fully test it out, but the next time if he did, we sure hope he already have a four-point harness in place and for the love of God, he would a helmet or maybe even a fire-retardant race suit.

‘nuff talks. Time to catch the ridiculously awesome jet-powered go-kart in action in the embedded video. Tell me you didn’t blurt out ‘wow’ when watching it. 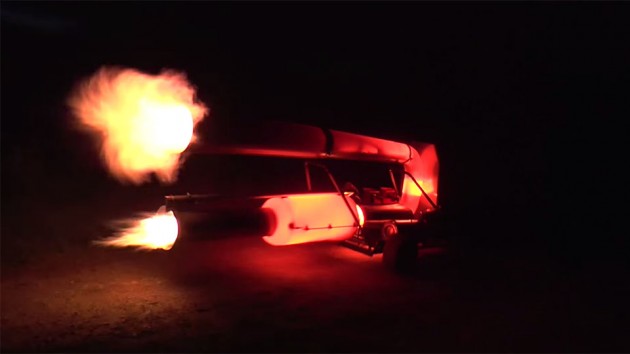