at a glance, the Toyota C-HR Crossover Concept looks like the Juke (in particular, the higher spec NISMO RS). this concept, which is destined for the Paris Motor Show, is not only a hint of future design language for the Japanese automaker, but signals a shift in crossover design that we thought started with the Nissan Juke. a powerful stance and muscular appearance are the first impressions we had looking at the two available images released by Toyota UK. details are scant, but that’s not going to stop us from liking the C-HR Crossover already. the C-HR is Toyota’s vision for a hybrid-powered compact crossover that also introduces “an expressive new design approach” with what Toyota refers to as “diamond styling theme.” 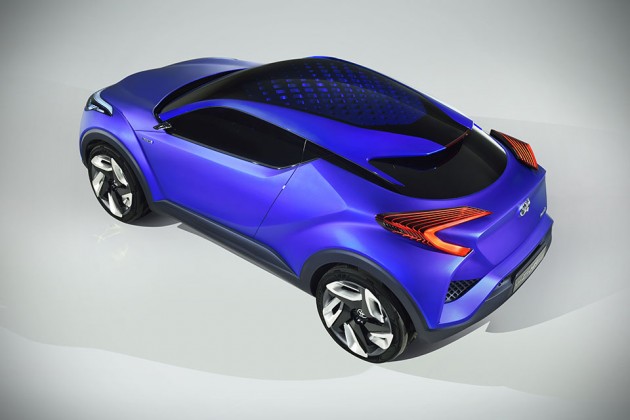 the upper is naturally, the result of aerodynamic considerations, resulting in a sporty, flowing design. the lower section, on the other hand, consists of sculpted, faceted surfaces that goes round the vehicle. in fact, the whole lower body looks pretty angular, save for the unavoidable roundness of the flared wheel arches which incidentally also lends the car the broad stance. at the nose, it is the familiar Toyota design, along with the angular treatment which marks the future design direction for Toyota rides. however, it is the rear of this concept that had our attention. it features a distinctive and almost space-age looking, aero-inspired floating rear lamp clusters over a sculpted broad angular trunk that completes the sporty silhouette. couple that with big ass rolling stocks wrapped in low profile rubbers, you have one seriously attractive crossover. but we have to remind ourselves that this is but a concept and how far it will go is a still mystery.

NOW READ  Alpine A4810 Concept Car by Students of IED

the Toyota C-HR Crossover Concept will be officially unveiled at a press conference on October 2nd, at Toyota stand in Hall 4, at the Paris Motor Show. perhaps, we will have more info then, but seriously, do you need more information other than the question ‘will it ever be made?’