We are officially the generation of smartphone addicts. Smartphone basically control every aspect of our lives. We look at it when watching TV and eating, and we even stare at it when we are walking along public sidewalks. While the former two are not much of a life-threatening issues, the latter is something of a concern. According to a study, about 43% of people have walked into something while their eyes are glued to their smartphones and obviously, this post a significant risk when crossing the road as eyes on smartphone won’t be able to tell if the pedestrian crossings, such as traffic lights, are in the favor of a smartphone addict. 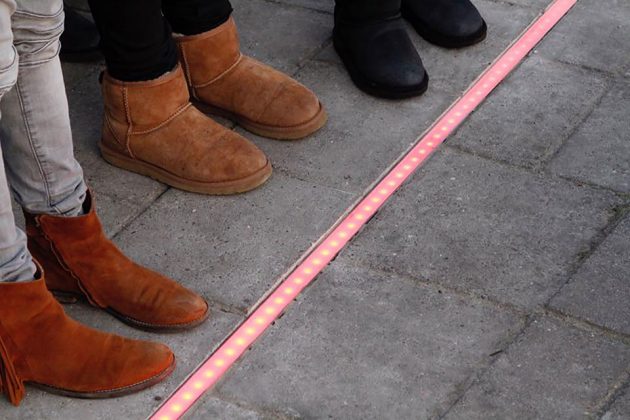 To mitigate this, a town in the Netherlands called Bodegraven has installed LED light strips that reflect the current state of traffic light where smartphone addict eyes will be: on the floor. In this way, those who can’t stop staring at their devices will at least know that if the pedestrian crossing is in his/her favor or not and hopefully, minimize or even avoiding unfortunate traffic accidents related to staring down at the phone too much.

The floor-embedded traffic light, which works in sync with the conventionally mounted traffic light, is installed in the town as a pilot project to study its viability and if it prove to be effective, Bodegraven’s HIG Traffic Systems hope to take the idea to other towns and cities. I guess what the Dutch is doing may be a more effective solution to this worrying trend.

Of course, the population can be educated not to do that, but that will take forever and cost a lot more, and so, you know what they say? If you can’t beat them, why not join them? And in this case, it means thinking out-of-the-box to come up with a solution that will prevent this new-age habit from destroying the device users’ life.