If you have in your possession some 8mm and/or Super 8 reels that contains precious footage from the very old days, Wolverine Data as a couple of solutions which will let you turn them into digital format as future-proof keepsakes. The Reels2Digital Moviemaker and the Reels2Digital Moviemaker Pro are the gadgets that will allow you to turn film footage into MP4 format, playable on modern day computers and TV sets. And they let you do so while looking pretty dope. The machines look pretty damn cool because of their likeness to the old school film projector. 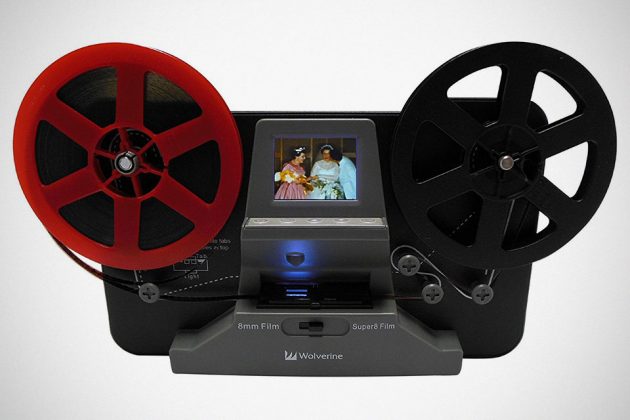 I did not dig into the details of how it actually works, but from the available product videos, it is quite clear that the device is essentially a scanner that picks up the image frame-by-frame as it passes the image sensor. I mean, after all, moving images, AKA videos, are essentially a series of still images. Anyways, the pair of machines from Wolverine Data does sound like a dream come true as far as precious memories preservation go. But it is not without its caveats. Firstly, there’s no audio and secondly, the SD/SDHC card which “ripped” footage is recorded on only supports up to 32 GB. Then again, old footage would not take much digital space. So, I guess all’s good? I think.

As a boon, the device will let you to playback directly onto a television, so those without a film projector can enjoy moving images recorded on those reels. In addition, you will have some control over the “scanned” quality by tweaking the exposure and sharpness, and previewing it on the integrated 2.4-inch TFT LCD. Actually, these are pretty cool gadgets to have if you has stashes of old films that you want to preserve. If you are keen, you can acquire the Reels2Digital Moviemaker and the Reels2Digital Moviemaker Pro over at Wolverine Data website for $299.99 and $399.99, respectively.

Here’s how the Reels2Digital Moviemaker works:

And here’s the product video of the newer Reels2Digital Pro Moviemaker:

In case you are curious about the quality of the transferred video, here’s a couple of example transferred by Scott Beale: