I knew it! I always knew chickens are not merely food for humans! There maybe some clever ones like, you know, those in Chicken Run (2000, DreamWorks), that are perhaps intelligent like aliens. Superior beings, as we would call them, but how I know? Just look this UFO Chicken Spaceship Coop by Backyard Chickens. While these chickens may not have built them, it does paint a perfect picture of aliens, I mean chickens, landing here on Earth. That being said, we can shut our argument on chickens or eggs first. Because, its UFO first. Maybe. Like, who knows, right? 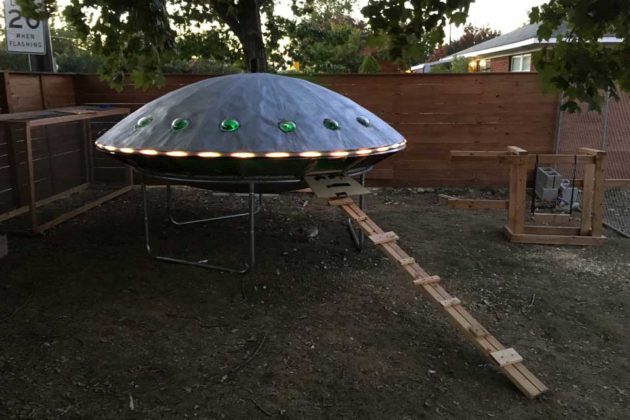 Anywho, back to more earthly details about this impressive build. It was cobbled together with two old satellite dishes (those for TVs, not for snooping out aliens, btw) and it gets everything it needs to be a decent abode to the chicks, including waterproofing, proper ventilation, remote-controlled heat emitters (to warm the chicks, not cook them) and even aerospace spherical windows, so they could have a view of the world outside as they zip around the clear blue sky. No, wait. It is a coop. It won’t actually fly. Anyways, it was a nice touch for our feathered friends.

There his also LED lighting too, just like an alien spacecraft would have, and there are some surveillance cameras for its owners to keep a look out on the flocks and eggs. Finally, it also has a proper ramp for ingress and egress. The only things it lack are propulsion and tractor beam used for picking up human beings for probing experiments. Also, a set of clear spaceship stand would be a nice mod so the ship can appear to be hovering. Don’t miss a video of the chickens in the process of making the escape in this impressive UFO Chicken Coop below.

NOW READ  How To Get Into Metalworking