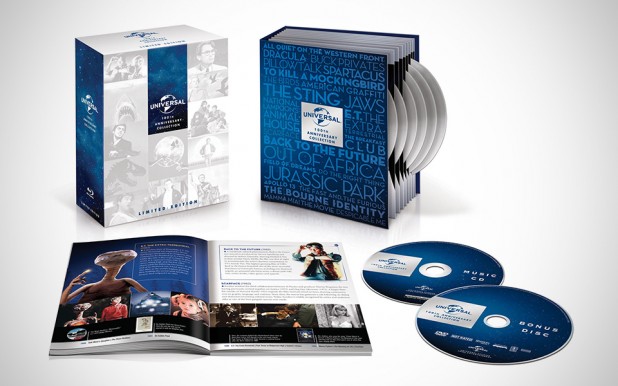 if you haven’t got a clue as to why there are so many re-releases of ‘old films’ from Universal Studios Home Entertainment this year, that’s because this year marks the centennial anniversary of Universal Pictures. speaking of which, if you haven’t grab any one of those special 100th anniversary edition of films such as Jaws (1975), To Kill a Mockingbird (1962), Back to the Future (1985) and the likes, then come this November, you will be able to score 25 of Universal’s most iconic films, all at one go, with the Universal 100th Anniversary Collection boxset on Blu-ray and DVD. this limited edition set includes 25 of the most memorable films from Universal Pictures, including the aforementioned films plus Dracula (1931), The Birds (1963), E.T. The Extra-Terrestrial (1982), Scarface (1983), The Breakfast Club (1985), Apollo 13 (1995) – just to name a few. also included is a 72-page collector’s book chronicling the history of Universal over the last century with rare photos and memorabilia from the studio’s archives, a bonus disc with featurettes, vintage cartoons and rare shorts, and a 15-track music CD featuring popular scores from movies spanning from Psycho to Spartacus to Out of Africa. available in DVD and hi-def Blu-ray format for $209.99 and $244.99, respectively. click on the above image for larger view.