the beauty of eBay is, it is a place where the weird, fun and bargains can be found, but the Velociraptor Cage From Jurassic Park here is most definitely not a bargain, however, it could falls under the weird things you might want to grab for your pad, as a conversational piece or whatever. we can’t say how much this cage will eventually set you back at, as it is going under the (electronic) gavel right now and has since garnered 153 bids, and stands at a little under 100 grand at the time of this writing. this massive velociraptor crate was used in the opening scene of Jurassic Park (seriously, i need a refresher – 20 years is a long time, y’know) and it comes standard with a full-size velociraptor prop, which was apparently used as a display at the film’s premier.

the crate has a steel base and is mainly made of wood and metal, and probably weighs anything from “several hundred to a thousand pounds.” being over two decades old, it is natural that the both the cage and the Velociraptor model does suffer from the inevitable wear and tear, but i am sure avid fans and collectors would already expect that and prepared to welcome it with open arms regardless of the conditions. if you have the money to drop and happens to reside in and around Los Angeles (and have a truck for a self pickup), why not join in the bidding fun? the auction for the Velociraptor Cage From Jurassic Park ends on February 4, 2014 at 20:10:08 PST. 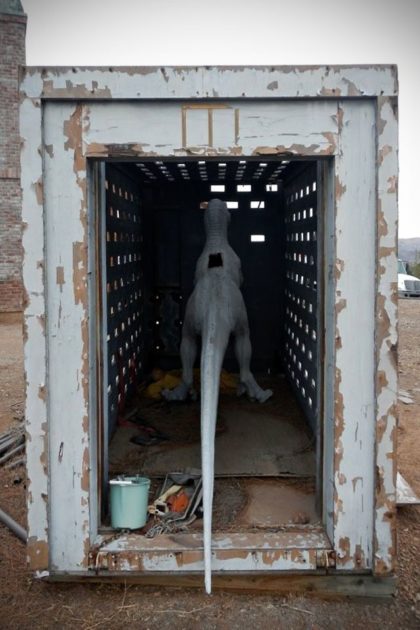 eBay via The Week