so you are totally addicted to your game console? you know it’s not a good sign, but you can’t for your life, give a moment with Call of Duty. fortunately, you can seek a short reprieve soon by bringing your first person shooting to the real world – with toy guns, of course. the Tek Recon Advanced Battle System is the result if you were to combine a first person shooter video game and a NERF gun. what you get is a real world projectile shooting blaster toy ready to be rigged with your own smartphone such as iPhone, offering you augmented reality, GPS tracking, different vision modes, and play in the real world the game that would have played in the video game. so who needs a FPS simulator that keeps you on the same spot when you can actually dash, duck and do the complete set of fire movement routine? sounds awesome to me.

on the hardware business side of things, the Tek Recon is available in two blaster models: a pistol-like Hammerhead and an assault rifle-style Havok. each blaster is capable of blasting custom NRG rounds (soft rubber rings) to over 75 feet (23 meters) in massive 25 or 72 round rapid fire. other features include rapid fire trigger or pump action firing, real recoil kickback for added realism, sound effects, removable smartphone mount, and of course, multiplayer modes. the only catch is, you do need real friends to really take advantage of what the Tek Recon has to offer. that’s also why its maker is offering bundle packs for more friends to get into the game, in addition to the individual products. you can get yours from Kickstarter for $25 or more. check out a pledge video below to learn more. 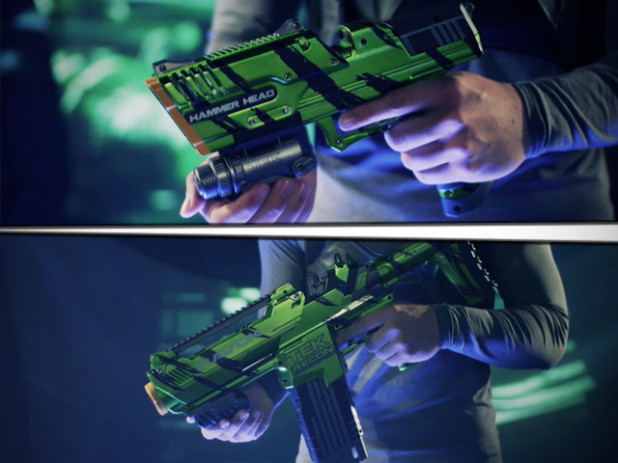