When getting your ride all chromed out was deemed insane, people thought why not matte paint job too? Since then, chrome or even gold-plating car is not a thing that wows anymore (well, at least not as much as before). It was the matte paint or wrap which was all the rage. Just when you thought car paint job couldn’t get any wilder, this Velvet-wrapped Maserati Ghibli Luxury Sedan came along. Yes. You heard that right. Velvet. You know? That material that’s soft to touch and seems to change color when you rub it in a particular direction? Yup, that kind velvet. 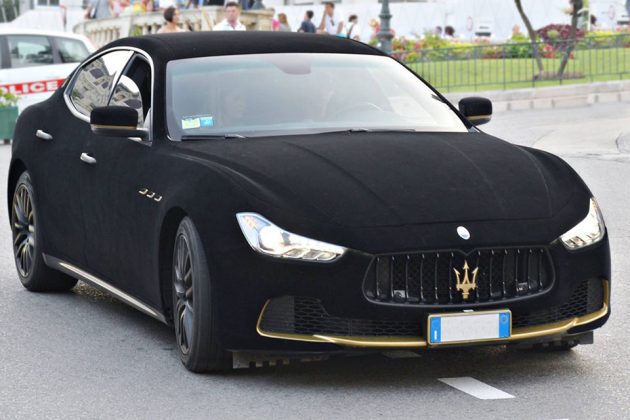 Apparently, it is the latest car fad after matte paint job and it is easy to see why (well, kind of). For one, it sure looks fuzzy cosy, giving the ride a sense of ‘royalty’, so to speak and while so, I can’t help but to wonder: what happens when it rains? Isn’t velvet super absorbent? Hmmm. Food for thought, eh? However, I guess you are probably all good if you are in a rain deprived region.

Though I cannot fathom the maintenance part of this. Washing with water is off-limits, perhaps? As it turns out, there’s in fact a company called Velvet Cars that specializes in velvet wrap and according to the outfit, the velvet-wrapped cars can be clean as per normal. Even pressure jet seems to work on it too.

NOW READ  5 Ways To Add Some Style To Your Car

Anyways, judging from the particular example which sports classy touches of satin gold and blackout details, the owner should be a person who’s adamant about elegance. While I question its practicality, I also can’t deny this Velvet-wrapped Maserati Ghibli Luxury Sedan tickles my fancy.

Images and source via Carscoop