Imagine a world where electronic gadgets never need to be charged. Imagine products like smart lock or IP camera that never need battery change. Imagine stepping into a room and placing your smartphone on the table, and it gets charged. I know right. It sure sounds far too sci-fi-ish. But what do you know? It is actually not. The technology to enable this sci-fi-like scenario is here and the company responsible for this wonder tech is Israeli company Wi-Charge.

Just to be clear, we are not talking about Ossia’s Cota technology, nor are we talking about Disney’s wireless charging room. Wi-Charge is not only real, but it is here, ready for OEMs to pick up and implement into their electronic products. So, what kind of voodoo is this that makes user intervention-free charging possible? The short answer is, invisible infrared light and photovoltaic cells. 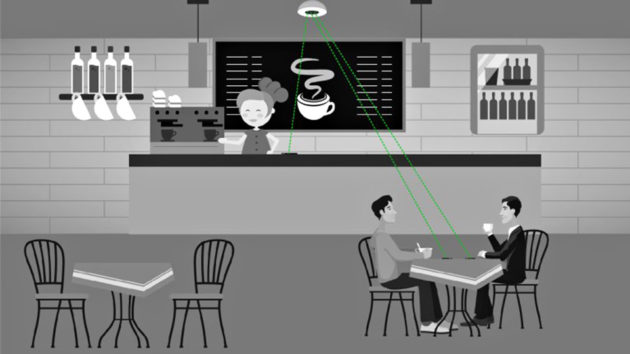 The long answer is this: a transmitter, connected to a standard power source, beams out safe, focused invisible IR light while the receivers, either embedded in an electronic device or as a dongle or case, with miniature photovoltaic cell “catches” the IR and convert it into electrical power. And voila! Charging occurs without you lifting even a finger.

Sounds simple enough in theory. But there is a lot more going on than that. The transmitter is designed to automatically identify chargeable devices and the corresponding power requirements. When several devices are within the range, it can prioritize the power based on the power requirements, battery level and other parameters, so that every devices get charged.

There is a slight catch here though; the transmitter require a line of sight to charge. If the path between the transmitter and receiver is blocked, transmission will cease. However, once the line of sight is restored, charging will resume automatically. Wi-Charge said their products are US FDA-approved and the technology is both safe and efficient.

Wi-Charge said that 100 percent of the transmitted power will reach the receiver with all the optical power can be used to generate electricity, and it will not interfere with existing phone or WiFi signals and the IR will not land on people, animals, or other unrelated objects.

Here are the key features straight from the source:

• Power over distance – several watts at several meters.
• Automatic – transmitters find enabled devices and power them without intervention.
• Wide coverage – a single transmitter can cover 250 square feet.
• Nearly 100% link efficiency.
• Supports many simultaneous devices.
• Scalable – multiple transmitters can be combined to increase coverage and power.
• Smart power delivery according to parameters from the receiving-device.
• EMI-free – does not interfere with WiFi, wireless phones, etc.
• Safe – complies with US FDA and international standards and regulations.

And here’s a video of toy trains powered by Wi-Charge:

Wi-Charge is perhaps the most exciting tech develop in 2018. The prospect of receiving power for mobile gadgets much like receiving WiFi signal is super exciting. Wi-Charge is continually working to develop its technology to work with more devices and the latest to be included are Amazon Echo Dot and Google Home Mini. 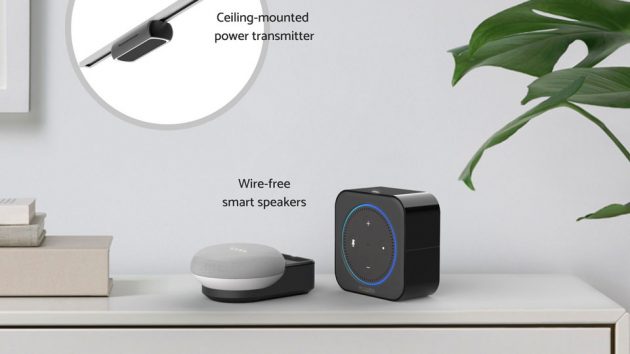 Last Friday, the company revealed a new Wireless Power Kit that will turn existing wired Amazon Echo Dot or Google Home Mini into a totally wire-free product, allowing you the freedom of placement of the device without the restriction imposed by cable, or proximity to a power source. At the same time, Wi-Charge also announced a “Powered by Wi-Charge OEM Program,” aimed at helping select partners to bring wirelessly powered product to the market.

The program will see Wi-Charge providing select partners with the hardware required along with documentation like detailed data sheets and reference design schematics, plus support, and no-cost upgrades. Wi-Charge said it will be accepting a limited number of partners at this stage. As for the Wireless Power Kit, it is available as a reference implementation for OEMs who are seeking to incorporate Wi-Charge into their product line.

This is truly an amazing tech develop and therefore, it is no surprise that Wi-Charge has been selected as an CES Innovation Award recipient second year in a row. Speaking of which, if you are heading to CES next year, you will be able to catch the Wireless Power Kit for Amazon Echo and Google Home in action at CES 2019.