Tires are expendables. They get worn and need to be replaced with a new set and hence, it is hard to imagine anyone, or any establishment would consider giving this rubber compound a bling. Then again, sometimes what people and/or company thinks defy logic or sensible considerations and the same goes to the person who paid way over the odds for this set of super luxe-up tyres (tires) from UK tire manufacturer Z Tyre. And how much exactly was it? AED 2,202,000, which works out to be around $600,000, or £420,400, as officially recorded by Guinness World Records last month. That’s one heck of tire, isn’t it? I can’t imagine a tire that cost a thousand bucks each, much less one that commands $150,000 a pop. Now, that’s preposterous. 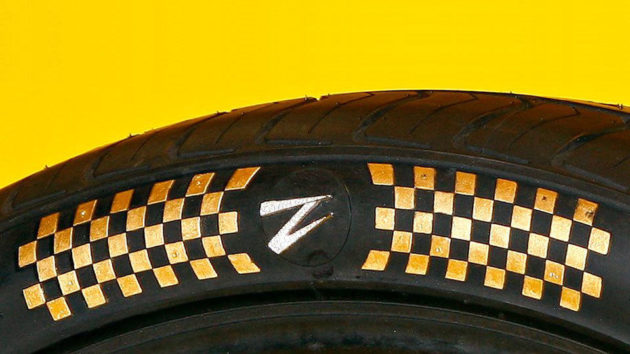 While it seems that Z Tyre may have made a record sale, the sale amount won’t log as earnings; instead, the entire sale proceeds will be donated to Zenises Foundation, a charitable outfit that puts food on the tables of the unfortunate, create jobs and provide education et cetera. In any case, it was done and sold, and therefore, it is now officially a world record recognized by Guinness World Records. But makes the tires so exorbitant? Not surprisingly, it was the diamonds and gold, not some space age, futuristic rubber compound as I have first anticipated.

The set of four 295/35 ZR21 tires features Z Tyre logo embellished with “specially selected” diamonds and 24-karat gold, worked on by jeweller Joaillier Prive and his Italian jewelry designers. After which, the set of rubbers were shipped to United Arab Emirates to be layered with gold leaf by the same specialists whom apparently worked on the Abu Dhabi Presidential Palace.

I am not going to lie, I was a little disappointed by the tires even though I am clearly not the one who dropped 600 grand on them. Why? Because at $600K, I was expecting one of the two things, or maybe even both and that would be a space age compound that perhaps contain elements like ancient meteorite, and/or tire walls complete covered in diamonds, not just the logo. Come on, I am sure that’s not too much to ask, right?