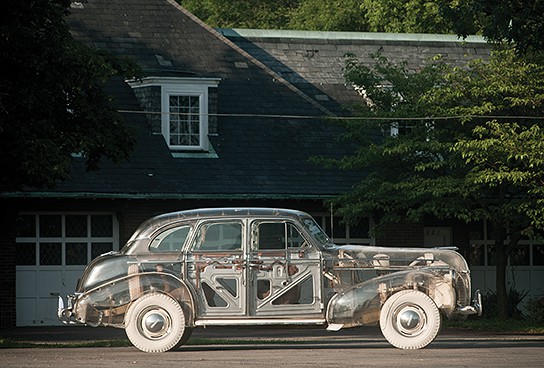 there are just way too many cool stuff to feature, therefore instead junking readers with slew of news and the latest, we set about introducing readers to the coolest stuff, such as this 1939 Pontiac Plexiglas Deluxe Six “Ghost Car”, that is set to go under the hammer at the upcoming St. John’s (formerly Meadow Brook) auction organized by RM Auctions in conjunction with the Concours d’Elegance of America.
[ad#Google Adsense-text-468×60]

conceived by renowned designer Norman Bel Geddes, this Plexiglas Pontiac or Ghost Car has plexiglas instead of the usual sheet metals and underneath, the structural metal was given a copper wash, and all other hardware including the dashboard was given the chrome-plated treatment. GM even went to the extend of using white rubber moldings which include the tires. the car reportedly cost $25,000 to build. it may sounds nothing but $25k back in those days were considered astronomical amount.

under the hood, this classic transparent example is powered by a 85 horsepower (63 kW) L-head six-cylinder engine mated to a three-speed manual transmission and not surprisingly, it had a column gear shifter, thus allowing a full bench seat to be fitted. comfort department was decent for those times with coil spring independent suspension up front and live rear axle with semi-elliptic leaf springs at the rear. stopping power is blessed by hydraulic drum brakes all round. pretty wicked cool, don’t you think so? hit the jump and check out more awesome images of the “Ghost Car”.