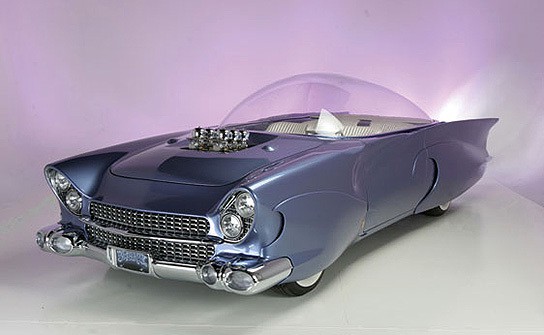 old school futuristic look is what i would describe the 1955 Ford “Beatnik” bubbletop custom concept. every aspect of this gorgeous custom concept speaks of the future as seen in the 50s perspective. every part ranging from the bubble glass top that tilts up, the aircraft flight yoke-inspired steering wheel, the roundish dash pod and the covered wheel wells which gives the car a floating appearance – all which reminds me of the 60s cartoon The Jetsons.
[ad#Google Adsense-text-468×60]

despite its model name, this amazing concept is not entirely a Ford. built by Gary “Chopit” Fioto, the “Beatnik” is a fusion of several automobile brand model from the 50s and 60s, which makes it an unique one-of-the-kind automobile. aside of having a body of a 1955 Ford, it has a 1988 Lincoln Town Car chassis, a Chevy 350-cubic inch V8 engine, 58’/59′ Cadillac bumpers and 1960 Chrysler’s finned taillights. other parts of the car such as the fenders, and the entire rear section of the car were all hand-made.

the Beantnik took Fioto four years to complete and will be going under the hammer at the RM Auction‘s annual Amelia Island event on the 2nd of March. want one? well, there’s only one such exemplary available in the entire universe and you have exactly a month to prepare enough cash to give it a go during the auction.