trying to determine the height of the Godzilla is like trying to put a length to the unicorn’s horn. though it was not really without a height; its creator does have a size for it when he first dream up of this iconic silver screen monster but since than, it has gone through many iterations and along with it, grown in size too. whatever it is, it is still a colossal monster and for the 2014 Gareth Edwards’ version, it is rumored to be even more massive and if JAKKS Pacific official 43-inch Long Godzilla Action Figure is anything to go by, we have reasons to believe Gareth’s rendition will be the largest Godzilla yet (and it definitely won’t look like a T-Rex, btw) and so will the toy movie merchandize.

this enormous toy measures an insane 43 inches… long (we almost got you there, didn’t we?) and stands a towering 24 inches tall (61 centimeters), and boasts a total of 12 articulated points and a swinging tail that works in harmony with the monster’s opening and closing mouth. unfortunately, as mighty as the toy might be, it still doesn’t breath radioactive fire or any of sort. but, hey, it has to be kid-friendly, right? look for the 43-inch Long Godzilla Action Figure at your local Toy ‘R’ Us stores starting from today. yes. today. and oh, if you want one, be prepared to drop 50 bucks for it. another look after the fold and while you are there, you might also want to check out the 2014 Godzilla official main trailer in the embedded video to, you know, to psyche thing up a little. 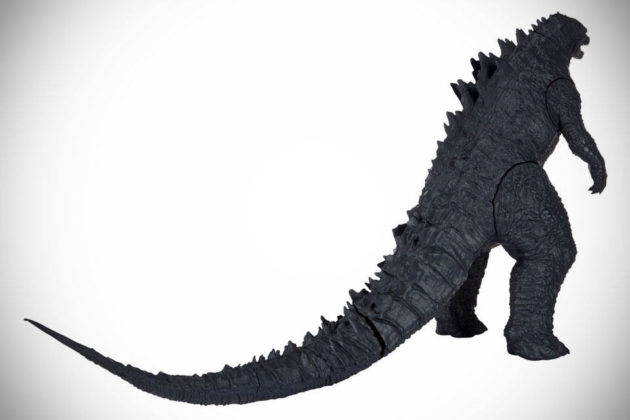