British mad garage inventor, Colin Furze, strikes again and this time, he was asked by BBC to build The Stig, the anonymous race car driver from BBC television series Top Gear, a new ride. According to BBC The Stig loves it when the slow is made to go fast which is pretty much the Colin’s speciality. In response to this request, Furze set out to procure a 1960s dodgem AKA bumper car and proceed to turn it into anything but an electricity-driven flat ride. The reborn bumper car is given a set of go-kart wheels and at its heart, it has a 100BHP 600cc 4-cylinder motor pulled from a Honda sports bike. Already, you know it is going to be an insane ride, don’t you? 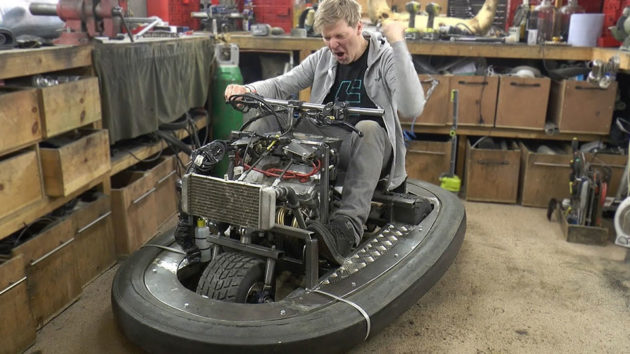 But what’s going to make this bumper car scary fast as promised is not only the fact that it has got 100 horses in a ridiculously small body; it is also because it has only three wheels and that my friend, will prove to be a challenge because balancing at speeds with factor such as an usually wide body is something reserved for those with balls of steel. Anyways, the build is already completed. What’s left to be done will be a paint job and putting back some of the chrome bits and stuff. After which, it will be time for The Stig to stick his ass on this dodgem on steroid and push it to its limit. And Oh, did we mention it had a BMX stem for steering? Yup. It sure does.

Skip ahead to catch both parts of the build. The glorious moment, i.e. action video, of the monster bumper car will be on Colin’s YouTube channel on March 30.