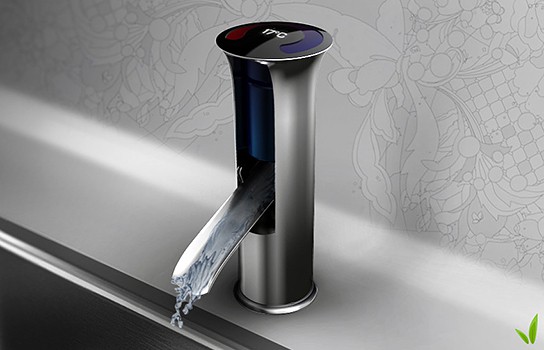 Mickaël Chrost‘s Bamboo Fountain is a gorgeous faucet that is anything but conventional. instead of the standard nozzle that sends water gushing out from the tap, Mickaël’s Bamboo Fountain lets the water “falls voluntarily in a slow fashion to avoid wastage.” aesthetically the faucet resembles a section of a bamboo stem with a slit and tip combo that lets water pours out. the concept drew its inspiration from the natural Asian fountains which explains its unmistakable oriental-look and feel.

the Bamboo Fountain features an integrated purifying cartridge that purifies the water while additional cartridges can add some dietary elements such as Calcium, Iron or Potassium into your drinking water. that’s of course, assuming that the water is safe for drinking to begin with. adding a dose of future tech is a touch sensitive display that replaces the traditional mixer for users to easily adjust to their desired temperature. it even displays the exact temperature measure on the faucet itself. wow. welcome to the future.