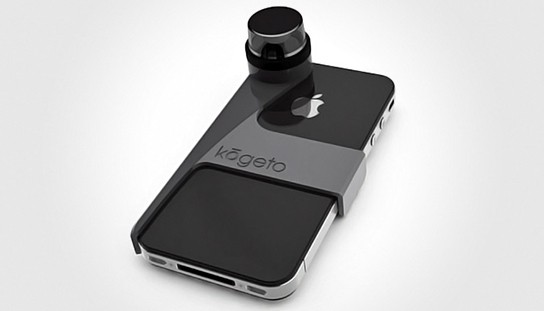 so who is or what is DOT? DOT is the new kid on the block for 360-degree video recording for iPhone 4. along with a purposed-built app, the small panoramic lens attachment allows iPhone users to capture 360-degree video without physically rotating the device. the capture video is totally navigable which is what makes it so cool. of course, this 360-idea for iPhone isn’t new, as previously it has been explored by the GoPano, which does pretty much the same thing.
[ad#Google Adsense-text-468×60]

DOT is the brainchild of New York-based firm Kogeto that develops 360-degree panorama video devices for various field of applications. the hardware works in sync with a dedicated app that translated the otherwise warped image into a 360-degree navigable video. the capture video can then be viewed on the iPhone or share with friends via social networking sites such as Facebook, or streamed online using Kogeto panoramic video web platform and player. Kogeto expects the DOT to be in low-volume production early summer, with a launch party in New York in June and a full production is expected to happen by August.

Kogeto is seeking support to fund this wonderful project via Kickstarter. if you are keen to own one of these, all you have to do is make a minimum pledge of $98 or more at Kogeto’s Kickstarter page to pre-order yourself one. as it stand, Kogeto has already surpass its pledge goal by a cool $15k and it still has 39 days to go. so will it be as well received as the GoPano which were priced at a lower price point? i guess only time will tell.