Not everyone can keep their cool when a cat climbed on top of him or her while giving an interview. Well, at least most people won’t. Don’t ask why a cat, but that was exactly what happened when Polish academic Jerzy Targalski was being interviewed by Dutch news show Nieuwsuur on the controversial forced removal of Poland’s top Supreme Court judge. As you can imagine, the topic of interview was some serious shit, but cat being a cat, does not give a shit.

I guess it was just another day with his master, with or without camera. As the interview was in progress, Targalski’s beloved feline friend, named Lisio, began scaling up onto Targalski and eventually perching on his shoulders. Notwithstanding the disturbance, Targalski get on with his interview. At one point, the tail of the cat blocked Targalski’s eyes, but the man cooly held the cat’s tail down and continued with what he had to say. Throughout the interview with the cat stealing the show, Targalski didn’t even flinch. He just kept on going like as if dear kitty wasn’t even there. 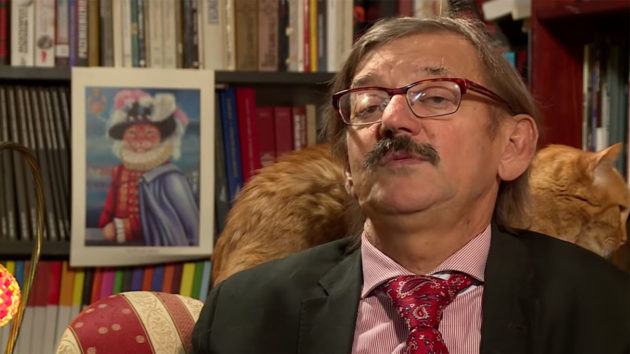 You know what this tells us? Formality is nothing and this man really adores his cat. Apparently, this wasn’t the first time the academic’s car have stole the show. As it turns out, it happened earlier this month during an interview with Polish public broadcaster Telewizja Republika. But that incident was a little less bold. Lisio simply walked in the picture as the interviewing was going on and set herself behind Targalski to take a nap. I don’t know about you, but I think this kind of made Jerzy Targalski the coolest academic we have seen and the cat, the coolest feline ever.