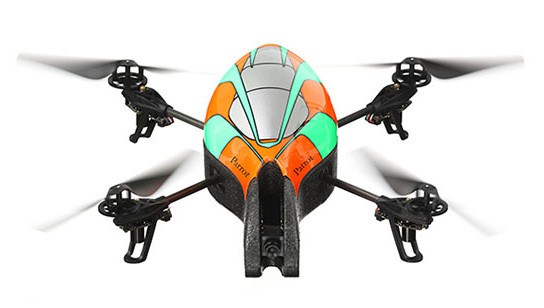 i want one of this! ok, i know there are a lot of things that i want but you can’t blame me, these babies are simply too irresistible! the guys who brought you ZIKMU Parrot wireless speakers designed by Philippe Starck, now brings you the Parrot AR.Drone, a WIFI iPhone-controlled RC flyer. on the first glance, the AR.Drone looks like something that came out of the US Army Air Force Recon Base. the AR.Drone is by no means child’s play. in case you are not quite a RC flyer like myself, the AR.Drone is packed with technology advancement which allows it to fly itself. don’t believe? just check these out: the AR.Drone comes with a inertia systems with MEMS (Micro-Electro-Mechanical Systems) that includes 3 axis accelerometer, 2 axis gyrometer, and a axis yaw precision gyrometer, an ultrasound altimeter and a vertical high speed camera (downward facing). built of carbon fiber and high resistant PA66 (Polyamide(Nylon)) plastic, the AR.Drone is propelled by specially designed propellers attached to 4 brushless motors system. the brushless motors extract its juice from a 3-cells 1000mAh Lithium Polymer battery which gives about 12mins of flight time when fully charged.
[ad#Google Adsense-text-468×60]

the AR.Drone come with two onboard cameras, one downward facing and the other, forward facing. it can go up to 9 meters and a brave a wind speed of up to 9 mph. is so that it? certainly not. the AR.Drone is more than an RC flyer, it can support augmented reality games which allows users (or players) to chase each other around the gardens and fires on each which can only be seen on the iPhone display. the AR.Drone requires the piloting apps (FREE) to work, which is available for download on the AppStore. there are also a couple of third-party flight control apps available too. the AR.Drone measures 450mm by 290mm from tip to tip and weighs 360 grams.